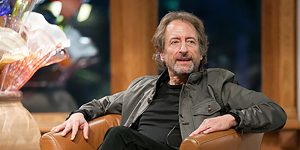 Next Stage Arts Project, the Putney based community non-profit, presents award winning author David Blistein reading from his new book “Opium” on Thursday, December 5 at 7:30 pm at Next Stage. The book, Opium: How an Ancient Flower Shaped and Poisoned Our World, tells the extraordinary and at times harrowing tale of how we arrived at today’s crisis.

Mr. Blistein will be joined for this special event by his collaborator and co-author Dr. John Halpern and the pair will facilitate a Q&A with the audience following the reading. Signed copies of the book will be available for sale. Admission $5 – $35 sliding scale with 100% of the ticket sales supporting Groundworks Collaborative and Next Stage Arts Project. Josh Davis, Executive Director of Groundworks Collaborative said, “In a time when there are a lot of unanswered questions around the opioid epidemic, David and John’s book asks a lot of interesting questions that are poignant and add depth to this complex and difficult topic.”

In 2017 over 47,000 Americans died as the result of opioid overdoses, more than died annually in this country during the peak of the AIDs epidemic, and more than die every year from breast cancer. On a statewide level, Vermont has been ravaged by this epidemic. But despite the unprecedented efforts of regulators, activists, politicians, and doctors to address the overdose epidemic, it has only become more deadly, the legion of quick fixes often falling into the very same traps that have foiled humans attempting to tame the scourge of opium addiction for centuries. To truly understand and combat the overdose crisis, we must understand how it came to be.

“Next Stage extends its gratitude to authors David Blistein and John Halpern for sharing this vitally important work with the community,” said Next Stage co-founder Billy Straus. Filmmaker Ken Burns said about the book, “Opium insists that we take an unstinting look at the relationship between people and opioids and dares us to make the hard decisions necessary to deal with the crisis. This book is what history is supposed to be.”

The story begins with the discovery of poppy artifacts in ancient Mesopotamia, and goes on to explore how Greek physicians forgotten chemists discovered opium’s effects and refined its power, how colonial empires marketed it around the world, and eventually how international drug companies developed a range of powerful synthetic opioids that led to an epidemic of addiction.

Throughout, Dr. John Halpern and David Blistein reveal the fascinating role that opium has played in building our modern world, from trade networks to medical protocols to drug enforcement policies. Most importantly, they disentangle how crucial misjudgments, patterns of greed, and racial stereotypes served to transform one of nature’s most effective painkillers into a source of unspeakable pain—and how, using the insights of history, state-of-the-art science, and a compassionate approach to the illness of addiction, we can overcome today’s overdose epidemic.

David Blistein wrote the award-winning PBS documentary The Mayo Clinic: Faith – Hope – Science and is currently working on a three-part series on brain disorders and mental health as well as a documentary on Henry David Thoreau. He also co-wrote the films Cancer: The Emperor of All Maladies and The Genefor PBS and is the author of David’s Inferno, a book that combines personal anecdotes with insights into manic-depression and descriptions of how it is diagnosed and treated.

John H. Halpern, MD, a psychiatrist in private practice, previously served as medical director of the Boston Center for Addiction Treatment, the largest substance-use disorder hospital in New England. He completed his residency and a fellowship in addiction research at Harvard Medical School, where he spent over 20 years on the faculty and served as the director of his own research laboratory at McLean Hospital, supported by private grants and National Institute on Drug Abuse funding.

Next Stage is located at 15 Kimball Hill in downtown Putney, VT.