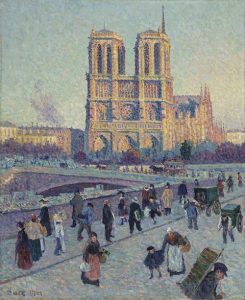 When the Cathedral of Notre Dame in Paris burned yesterday, it was more than a religious icon that was lost. For workers, women, artists, tourists, the city of Paris and all of France, Notre Dame was both monument and living symbol of human aspiration and French spirit.

Notre Dame has always been remembered for the prodigious labors of the generations of workmen and artisans who created it. It was ordinary people who built it and, in large part, it is their legacy that went up in flames.

It was also the shrine of the patron saint of women, the only remaining exemplar of the divine feminine in all of male-dominated Western culture. There are churches of Our Lady in many towns but there is only one Notre Dame. Mary, wife of Joseph, mother of Jesus, may not appeal to modern minds but for Catholics, she has been an ideal of womanhood even to the present era. The Hail Mary is still spoken as part of the cycle of prayers that make up the Catholic Rosary. Mary stands for women in all their roles including the traditional roles of sister, wife, and mother. It was her church that burned.

Symbolically, it’s hard to imagine how there could be a worse time for the Cathedral of Notre Dame to burn down than during Holy Week, six days before Easter Sunday. Although prominent Catholics took pains to look for a silver lining — the church will be rebuilt, it will be better than ever! — rank and file Catholics cried and sang Ave Maria.

Some cynics might dismiss this iconic building as a symbol of extravagance in service of a dying religion, but that assessment misses by miles the building’s significance for the masses of ordinary people of all faiths and ethnicities who have made the pilgrimage to see it. Notre Dame wasn’t just impressive to Catholics. Its unique and soaring towers, ancient statuary of saints and kings, celebrated gargoyles, and the solemn ambiance within its walls had a power that transcended Christianity.

Perhaps because of its architectural power and great antiquity, Notre Dame has come to symbolize Paris itself, especially in the modern era. It is situated in the old part of the city on an island in the Seine. It is the point from which all distances are measured — France’s ground zero, so to speak.

As French President Macron pointed out in his speech last night, a building of this importance to people everywhere and to world culture cannot be left to fall into ruin. Notre Dame will be rebuilt and new generations of workers and artisans will labor to restore and renew it, contributing new skills to its ongoing legacy and keeping the past alive. Nevertheless, it will be generations still before Notre Dame de Paris is restored to any semblance of her former glory.