This is the 26th year that world leaders have come together at the Conference of Parties (COP) organized by the United Nations. During those years the planet has been increasingly abused by humans and is now in danger of even more climate catastrophes than we have already experienced.

Climate activist Greta Thunberg has declared COP 26 a failure and she has made it clear that as the planet dies all we get are words of recognition that a crisis is taking place. What little action there has been to fix the planet has not been enough and world leaders have nothing to offer but empty promises of throwing money at the problem a few years from now.

III. Receive an update from Paul Smith about progress on the Environmental Awareness and Responsibility policy that was adopted in May.

Here is disturbing information to show how serious the climate emergency is for youth, our communities and the world. People should take a hard look at this and take action. Not knowing what to do is not an option. The people need to to take action NOW. Be SAFE. Be well. Be Warned. Leave your thoughts below.

Here is a link to the article: 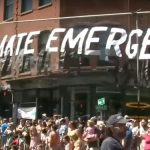 The Climate Crisis Committee of the Windham Southeast School District is advocating bold legislation..
Two years ago BCS started a Climate Crisis Committee in the school district in order to create a standing forum for climate issues and to keep climate issues in the board directors’ attention. The school district is larger than Brattleboro, and people are more sensitive and protective about it. So, it is a good venue.

In steady times the purpose of education is the transfer of culture and society. The Greta Thunberg Resolution addresses climate crisis through the schools. Realistically, scientifically, in the ultimate crisis the purpose of education must be to prepare students for life in that crisis, and to encourage serious action for survival and rescue. Since we all recognize Greta Thunberg as an exemplary influence on our students and society the WSESD should reduce the school week to four days, so that students have time to pursue climate rescue following Greta Thunberg’s exemplary activism. Many people who say they admire and support Greta Thunberg will oppose the resolution. So, the resolution illuminates latent denial. 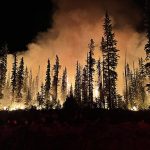 Unless you’ve really been living in deep media seclusion, you probably already know the planet is in big trouble. The planet’s troubles, expressed as record heat waves, epic wildfires, prolonged droughts, biblical rainstorms, and erratic weather patterns, have led to all kinds of disruption here below.  Mother Nature isn’t just angry — she’s in crisis.  Which isn’t surprising since humans have been systematically trying to kill her off pretty much since the dawn of mankind.  Clearly she can’t take it anymore.

But elaborate metaphors aside, I’ve been worrying more than usual about the state of the environment and the decline of the natural realm, from the changing climate to the alarming loss of wildlife around the world.  Although it’s easy to forget these things living in Vermont, we do not live in a bubble.

Here’s a new interactive climate map from the IPCC, the Intergovernmental Panel on Climate Change:

They describe it as” A novel tool for flexible spatial and temporal analyses of much of the observed and projected climate change information underpinning the Working Group I contribution to the Sixth Assessment Report, including regional synthesis for Climatic Impact-Drivers (CIDs).”

III. Hear outline of Django’s Presentation, Which He Aims to Present at a Full Board Meeting in the Fall

IV. Get an Update from Tim About Progress on the Rich Earth Institute Program

It is helpful to step back every once in awhile and try to look at the big picture. What we see when we look at the human species and the planet is not pretty.
Living organisms are programmed for survival. But the great paradox is that so many human activities are geared toward destruction. One of the most glaring example has to do with climate change.

There have always been naturalists and conservationists among us. I would consider them people who understand that our behavior has an effect on all other living matter around us. Their voices have been small and not very loud over the ages, yet they possess the knowledge that all of us need to help preserve the natural world that we live in. Humans have never given science the respect it is due and that attitude is proving destructive to everything we interact with.

In the 21st century it is not enough for there to be naturalists pointing the way because humans have become so arrogant and selfish that the only way they will move to change their behavior is if it effects their pocketbook or their selfish way of life.

The Town of Brattleboro urges everyone to drink plenty of water, wear light clothing, and stay out of the heat as much as possible during the current heat wave.

From this chart we see that in 10,000 BCE (12,000 years ago) wild animals comprised 100% of the total vertebrate biomass on this planet. Today, wild animals comprise only 4% — less biomass than the cats and dogs that we humans keep for pets. The world’s cattle now comprise a greater biomass than all other animal species combined. Now you can believe that methane from cattle can make a deadly difference.

IV. Discuss Future Role of Task Force After the Board’s Adoption of an Environmental Policy

V. Hear from Kurt Daims About the Greta Resolution for Devoting Public Education to Climate Rescue

Nick Biddle PhD. will offer brief comments assessing the nature of the Trump presidency and its consequences. In light of those consequences, how might Democrats repair democracy’s damage as they face pandemic, economic turmoil, un-civil cultural war and raging climate crisis? Democratic leaders compare this moment to World War II. What bold steps will work to repair ourselves and our world? General discussion will follow. Please join the conversation. Nick has lived in Brattleboro since 2013. He is a retired professor of Latin American History.

NOTICE OF BOARD MEETING

The Windham Southeast School District Board will meet remotely at 6:00 p.m. on Wednesday, November 4, 2020 via Zoom:

Coronavirus. Protests. Police. Elections. Masks. There is a lot to be thinking about right now.

Add that pesky climate emergency back on the list:

“The world has only six months in which to change the course of the climate crisis and prevent a post-lockdown rebound in greenhouse gas emissions that would overwhelm efforts to stave off climate catastrophe, one of the world’s foremost energy experts has warned.

NOTICE OF BOARD MEETING

The Windham Southeast School District Board will meet remotely at 6:00 p.m. on Wednesday, June 17, 2020 via Zoom: