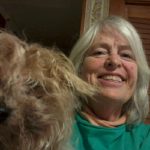 For the November 3, 2020 Presidential Election, you will be receiving an absentee ballot. This ballot will also contain on the reverse the local Justice of the Peace ballot.

I strongly urge you to review the ballot, make your choices and return it to the Clerk’s Office as soon as possible.

There is a secure drop box in the Municipal Center parking lot where voters themselves, or a friend or family member may return their ballot in the signed certificate envelope that will be sent with the ballot.

Please see here for the “unofficial results” for Brattleboro’s State Primary election. These are the results from the ballot tallies, not including write-in votes, and not including other towns’ results for the Primary races.

Thanks to the amazing poll workers and the American Legion who made today possible! Considering our number of absentee voters, we had a lot of voters coming through the doors, and record voter participation for a state-wide primary. The day was smooth and safe!

No handshaking and very few face-to-face encounters. Those are some of the major changes to political campaigning during a pandemic. The use of social media will be valuable as we head toward the first Tuesday in November.

Money will still rule because advertising on all levels gets a candidate’s name out there and television, print and other media ads do work. But there is also a potential for lower voter turnout because people may not be bombarded with the usual campaign activity of former years.

My hope is that, on the national level at least, voter turnout will be high because a majority of sensible Americans want to end the great American nightmare and make America sane again.

Below is information that might be helpful to know for August 11th State Primary elections.

Polling place for all three districts in Brattleboro is the American Legion, 32 Linden St., from 7:00 am until 7:00 pm.

Due to COVID-19, masks will be required (and provided if needed) to enter the American Legion for voting, and hand sanitizer or gloves will also be provided. If you are unable to wear a mask and did not vote absentee, there will be a space outdoors for you to vote. Due to social distancing and reduced capacity indoors, please be prepared for potential wait times.

“kvillemaire@cctv.org” of CCTV Town Meeting TV single handedly decided on July 20, 2020 to NOT allow Vermont voters to see 6 videos of candidate Cris Ericson who is on the 2020 Progressive Party primary election ballot for 7 offices. This person did allow one video in June of Cris Ericson’s campaign for Representative to Congress.

Here are the 6 videos that “kvillemaire@cctv.org” under “color of authority” deprived Vermont voters from viewing on July 20, 2020! 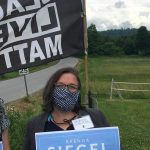 I’m sharing why I am supporting Brenda Siegel to become our next Lieutenant Governor of Vermont: a decision I came to after researching Brenda’s stand on policies and noting that she embraces similar progressive values as my own.  What I believe distinguishes her from other candidates are her valuable insight and wisdom: qualifications gained through her advocacy background, business ownership and life experiences as a single Mom.

American protestors have forced the world to examine racism and the issues that contribute to it. It is a monumental milestone in American history but these protests, fueled by the death of George Floyd, will hopefully be the opening round of the battle for systemic social reform that has been needed in this country for too many decades.

The length and breadth of the protests show that there are significant numbers of Americans who are willing to use their voices to promote short and long-term change. The big question hanging over all of this is whether or not politicians and policymakers will listen thoughtfully and work to implement meaningful systemic change. 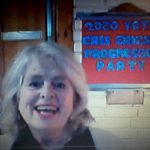 Cris Ericson, previously an independent and U.S. Marijuana Party candidate, is now a 2020 Progressive Party candidate for the Vermont primary election August 11, 2020. Absentee ballts are being sent out as early as the last week of this month, June 2020. Candidates have to use new ways to communicate with Vermont voters!

Cris Ericson is also happy to announce that she sees Emily Peyton as a Republican this time, and Boots Wardinski on the 2020 primary election ballot running against Cris Ericson for Governor of Vermont on the Progressive Party 2020 primary election ballot. Good candidates are not defeated because they lose in the past, they just run again! We are like sports teams that lose and lose and never give up and then surprise, surprise, we will win, hopefully in 2020!

Another black man is murdered by American police. People are outraged and they take to the streets. Their protests help to ease the pain of injustice every black person has to endure every day while trying to enjoy the privileges and rights of citizenship that the rest of us take for granted.

Those in power will sit back and do nothing to change the root causes of injustice that have led to yet another horrific moment in American history. They will engineer sound bites and they will pick out easy political memes to try to ease their base of the brain-dead followers who also are in the same political camp as the rich and privileged. They will even go so far as tear-gassing crowds of people near their home so they can take a walk whose purpose is to use the Bible as a prop in a culture war of their own creation.

With August Primary elections and the November General elections coming up around the corner, we encourage all voters to visit their My Voter Page to update their registration address, including their physical AND mailing addresses, and request an absentee ballot to be mailed to them.

The My Voter Page is now found at https://mvp.vermont.gov. If you encounter problems logging into your My Voter Page, please contact the Town Clerk’s office at 802-251-8157 for assistance. People can also register to vote using the online voter registration page at https://olvr.vermont.gov. Note that both of these links have been updated.

The national Democratic party machine has once again managed to set up its circular firing squad as the bullets started flying. Instead of developing a comprehensive strategy to use the presidential primary as a way to unify Democrats, they have created chaos while allowing Trump to set the agenda for just about everything they do.

The grand obsession is to focus almost all of their messaging and energy on their anointed candidate who they believe has the best chance of beating Trump in November. Debate over the issues important to voters has been tainted by the obsession.

Super Tuesday is over and the air waves are quiet. As you can imagine, I was very disappointed with the results; both with Bernie’s unexpected losses in Texas and here in New England but also when Pete And Amy precipitously threw their support to Biden along with Betto O’ Rourke. And even more when I heard that there had been a meeting of the party leaders before all that where I’m sure they pressured the moderate candidates to give their support to Biden. And Obama weighed in and Harry Reid and others. Then, in the “unkindest cut of all” Bloomberg bows out and moves to give Biden the use of his money! And now I here that the party is pressuring Warren to stay in to take votes away from Bernie. What kind of an election is this?

Attached are the results of the WSESD School Director Elections.

Please see the attached for the “unofficial results” for Brattleboro Town Meeting, WSESU School Board, & Presidential Primary Elections. These are the results from the ballot tallies, not including write-in votes, and not including other towns’ results for the WSESD or Primary races. The projected winners are in bold in each race.

We now have all interviews for Brattleboro Selectboard candidates available, and Tuesday is the day to get to the polls and vote if you haven’t already done so. Here are the links to candidate interviews, the candidate forum video, representative statements, and general election information. It is all to help guide your last-minute voting decisions.

Below is information that might be helpful to know for March 3rd local elections. In addition to local elections, the Democratic and Republican Primaries will be held.

Attached is a sample ballot from each of Brattleboro’s three districts. All districts’ ballots are the same except for Town Meeting Members for each district. Absentee ballots are currently available at the Town Clerk’s Office and may be requested until 5:00 pm on Monday, March 2. Sample ballots can also be found on our website at www.brattleboro.org under Elections.

Election official: “Which ballot do you want? Democratic or Republican?”

Vermont voter: “Why do I need to tell you which ballot I want?”

Early/absentee ballots may be voted in person at the Municipal Center, mailed to the voter by the Clerk’s office, picked up by the voter, or if a voter is in need can be delivered to the voter’s residence by two Justices of the Peace.  All voted ballots must be received by the Clerk before the polls close on election day in order to be counted.  For more information or to request an early/absentee ballot call 251-8157.

How did we fix it so all these things happened at the same time? What were we thinking when we scheduled Brexit, Impeachment wrap-up, Iowa Caucus debacle, and Trump’s State of the Union address within 5 days of each other? Are we insane? Do we want our heads to explode?

Ok, I know no one planned to make all these events coincide, but the fact that they did gives it that aura of fatedness. Clearly the gods are angry. The natives are getting restless. And as is typically the case, the overlords (clueless neocons and neolibs alike) are burying their heads ever deeper in the sand.