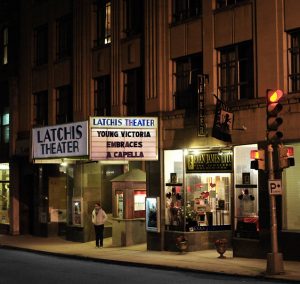 Like many of us, I’ve been staying safe during the pandemic and not participating too much in social events.  But I still stay in the loop with as many local organizations as I can.  Many of us with a connection to the arts worry that public performance art — of which cinema is one — may be busted back to the stone age, to put it bluntly, by our inability to gather in groups and the lack of funding that results.  The Latchis finds itself in this boat, and while they continue to show films under all the current rules for safe gathering in theatres, they have obviously taken a hit.

Lately, I’ve been enjoying their newsletters wherein Jon Potter, director of Latchis Arts, tells it like it is to his audience of people who like movies, music, and dance.  His most recent letter, which came out January 14, notes that arts groups are starting to regroup as it were, as we all adjust to the new circumstances we find ourselves in.  Adapt or die, is pretty much the story, and artists are trying to do that.

Needless to say, they could use our help too, so this year, I’m trying to spread my limited donation dollars around to groups like the Latchis that deserve our special attention because they make a difference in our community.  There are many other deserving organizations.

“I’ve been lucky enough to experience some hopeful moments in the last week or so, brightening the double-barreled gloom of mid-January and our long pandemic slog.

A couple of times, I have been on Zoom calls with non-profit colleagues and community leaders, and there’s been a universally positive tone. Yeah, we’ve still got miles to go, and much remains to be determined, but folks I’ve talked to have been upbeat. There’s a sense that some good things have happened during these difficult times, and we’ve done some learning and growing through this all. Maybe we’ll be better for having gone through this. That’s up to us. But we’re determined to make it so.

On a more practical level, I’ve had a couple of conversations with people to begin planning events at the Latchis Theatre. It’s very early, and we all recognize that we’re still a long way from being able to do it. But we’re having those talks. People are stirring the pot, and that feels really good.”

Many of us who value the arts do so in part because we value a shared culture, and the arts help to keep culture alive.  The idea that we might “lose the arts” is alarming.  The notion that the arts aren’t an essential part of being human are only acknowledges half the person.  We need the arts to live fully as human beings.

And so, I was encouraged by Jon’s words and hope that the arts will continue and even thrive during these turbulent times, as he mentions in his letter.  If you look back through history, great advances were often made during the most discouraging epochs in human history.  The same will be true today, although it won’t always seem like it at the time.

Support the arts!  They support you.