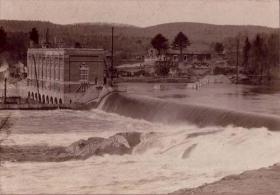 I just ran across this article

BOSTON, Mass., March 18, 1936 (AP).—A $1,000,000 dam at Vernon, Vt., went roaring out before the force of the flood swollen Connecticut River Wednesday night. State police announced as they ordered everybody out of the valley below.

The power dam yielded at 11:10 p.m. Its powerhouse had been abandoned shortly before. A six-mile ice jam to the north had caused apprehension for several days.

The Vernon Hydro dam is about a quarter mile below the Yankee site. The land upon which the Yankee complex sits, would have been totally flooded.