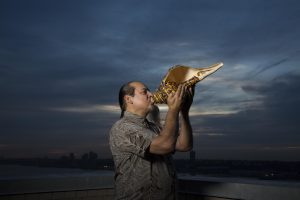 The Vermont Jazz Center is thrilled to kick off its 2019-20 concert season with a very special concert on Saturday, September 14th at 8:00 PM featuring the Steve Turre Quintet. Come hear Turre perform on trombone and conch shells with Bruce Williams on saxophone and flute, Oscar Perez on piano, Corcoran Holt on bass and Orion Turre on drums. Steve Turre is regarded as one of the finest jazz trombonists in the world. His on-going recording and performing career has included fertile tenures with Ray Charles, Woody Shaw, Rahsaan Roland Kirk and Art Blakey’s Jazz Messengers to name a few. This year he is celebrating 36 years as trombonist in the Saturday Night Live band. Turre has made records with a highly diverse group of artists ranging from Dizzy Gillespie, Celia Cruz, Etta Jones, McCoy Tyner, Max Roach and John Scofield, to Carlos Santana and Mariah Carey.

Steve Turre’s sound on trombone is clear and well defined and his playing features an expansive range, a broad harmonic vocabulary and a swinging, natural pulse. He loves to play in a variety of styles, but his embodiment of the Art Blakey/Woody Shaw interpretation of “straight ahead jazz” informs his clear intention and commitment to every note. The listener can feel the urgency and attention to sonic detail that these mentors imbued in their music and then passed on to him. Turre’s concept and repertoire demonstrates a mature connection to the jazz lineage that is steeped in the blues. He believes that the blues is one of the inherent ingredients of jazz. In an online interview, when asked about the current state of jazz education, Turre stated “people need to know where they’re coming from in order to know where they’re going. If they can’t play a blues or they can’t swing, are they really able to take the music forward? Everything has to have roots: the roots are what nourishes the tree: the stronger the roots, the more fruit the tree will bear.”

In numerous on-line inline interviews, Turre constantly alludes to key moments in jazz history: he peppers his conversations with relevant stories of past legends – singing solos breaks by Dizzy Gillespie or intervallic patterns by Woody Shaw to emphasize his points. Picking up his horn, he makes this history come alive. His own deep roots bear fruit whether wailing on modern-sounding originals, performing with McCoy Tyner or paying homage to Ellington’s top trombonists like Tricky Sam Nanton or Lawrence Brown. Turre’s initial exposure to jazz was through his parents. They were devotees of big band music who delighted in bringing the curious young trombonist to concerts and dances where he would experience, in person, the bands of Basie and Ellington performing with guest artists like Ella Fitzgerald, Johnny Hodges and Coleman Hawkins. In his twenties, Turre was touring and recording with Ray Charles, Woody Shaw and Art Blakey as well as making sessions with Paul Simon and Carlos Santana. He also displayed a love and affinity for Latin music which led to tours and recordings with some of the finest Latin and salsa bands that ever existed including those of Tito Puente, Manny Oquendo, Jerry Gonzales and Celia Cruz.

Turre took his time developing his skills as a leader, and it wasn’t until his mid-thirties that he began recording under his own name. To date he has released nineteen recordings under his own name. In an interview with Bone2Pick, he said “it takes time to mature, to develop your own voice and develop an artistic direction,  …it takes time because you have to learn, you have to grow and find out what the world is about in order to express your life through this music.”  He continued by saying that “music is an expression of life and whatever your life condition is. It’s coming out the end of your horn or through your instrument – you just can’t pretend.”

One of the critical components of a Turre performance is the inclusion of seashells: he has a collection of shells of various sizes ranging from small to gigantic. Each one has a carefully carved mouthpiece and a predetermined set of pitches, usually ranging about a fourth (for example, from C to F). He changes his embouchure and moves his hand in and out of the open end to change the pitch. His mentor, the multi-instrumentalist Rahsaan Roland Kirk, inspired him to play the shells when using a circular breathing technique that gave Kirk the ability to create one long tone for up to 5 minutes.  In the interview quoted above, Turre states “I was scared to play the shells in public. I didn’t want people to laugh… Rahsaan played three saxophones at once. It wasn’t a gimmick, so he was very hurt when people called his music a minstrel act…Being close to him I felt his anguish and I didn’t want people to say the shells were a gimmick. The thing that attracted me to the shells were their tone quality, they had such a beautiful sound so resonant and warm, it’s healing.” Today the shells are an essential element of Turre’s voice. This is best heard on his album (and occasional touring project) Sanctified Shells that features three shell players, trombones, trumpets and an expanded percussion section. This soothing, beautiful music combines the sounds of seashells with Afro-Caribbean rhythms and it is yet another example of Turre’s holistic, innovative approach to life that helps define his creative persona.

Steve Turre has said “I believe musicians are like doctors – we’re supposed to make people feel better.” The Vermont Jazz Center is honored to present him in a quintet setting on Saturday September 15th at 8:00 PM. Come to the show, he’ll make you feel better. This concert may sell out, so be sure to purchase tickets in advance. The VJC is grateful for this concert’s sponsors: Dave Ellis and Anne Greenewalt of Ellis Music, Mark Anagnostopulos and Janet Zinter, Mary Ellen Copeland and Ed Anthes, and Cohen and Rice Law. The VJC is also thankful for the ongoing support of Holiday Inn Express Suites of Brattleboro. VJC publicity is underwritten by the Brattleboro Reformer, WVPR, WVEW and WFCR.

Tickets for Steve Turre Quintet at the Vermont Jazz Center are $20+ general admission, $15 for students with I.D. (contact VJC about educational discounts); available online at www.vtjazz.org, by email at ginger@vtjazz.org, and at In the Moment in Brattleboro.  Tickets can also be reserved by calling the Vermont Jazz Center ticket line at 802-254-9088, ext. 1. Handicapped access is available by calling the VJC at 802 254 9088.