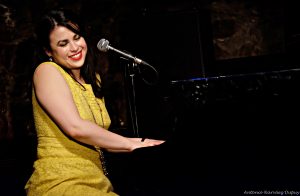 Acclaimed Pianist and Vocalist Champian Fulton to Perform Selections from the Great American Songbook at the VJC on Saturday, January 18th

The Vermont Jazz Center is delighted to present pianist/vocalist Champian Fulton on Saturday, January 18th at 8:00 PM. Fulton, a DownBeat Magazine Rising Star, was recently lauded as 2019 Female Vocalist of the Year and 2019 Pianist of the Year by Hot House Magazine/Jazzmobile. She will be performing with her working quartet of over a decade including her father, Stephen Fulton, on Flugelhorn, Hide Tanaka on bass and Fuku Tainaka on drums.

Champian Fulton swings hard – she’s a top-shelf pianist and vocalist with an expansive repertoire and a broad stylistic vocabulary. She likes to leave her sets open-ended so that she and her band can choose between familiar and little-known gems from the Great American Songbook on the fly. Considering her youthful age (34 years old), it is intriguing that Fulton’s repertoire naturally gravitates to selections from the swing era. Her whole persona, public and private, resonates with a love for the music from that time period. She conveys the essence of swing effortlessly and authentically; her performances give listeners a fresh appreciation of the creative possibilities inherent in an older style. In Fulton’s hands, swing is a vibrant, living music that resonates with meaning and joyous playfulness.

Fulton is also a composer who “loves to sing the blues” and has performed compositions written by bebop piano legends Oscar Peterson, Bud Powell and Cedar Walton. But she keeps coming back to the tuneful songs of the swing era: “I love the standards…the harmonic structure of tin pan alley [compositions] and the later songs by Cole Porter.” She feels that “there’s room for infinite growth and creativity within the framework of the standards.” To describe this, she brought up the beautiful Jimmy van Heusen chestnut, “Darn that Dream,” reminding us that she sang it on the first gig of her entire life and “has probably played it tens of thousands of times.”

When asked about the creative process and why she so often features standards rather than original music, Fulton responds that she feels that “real creative growth comes from playing with my band and paying attention to their ideas.” She is a team player who sees music as a collaborative project, something that is created on the spot through the synchronistic input of everyone in the band as well as the audience. “I think it’s important that the music is really organic,” she said, and she also thrives on “the audience, their energy and what they respond to.” Fulton continued, “I have found a lot of freedom [in my current group] because we’re so close. We’re so connected that we don’t have to play everything the same way. If I choose to make a left turn, the guys say ‘okay, no problem, let’s go!’ We don’t need to rehearse new ideas and write meticulous arrangements. I feel very free and very creative with this band.”

An only child, Fulton was a born in Norman, Oklahoma to doting parents. Her musician father, Stephen Fulton, was determined that his young daughter would be exposed gradually to a very specific musical diet.  He intentionally influenced her by at first exposing her only to the classic recording Charlie Parker with Strings. To this day, she feels “at home with that music, because that was literally all I listened to.” In the podcast The Jazz Session, Fulton tells us that when she was just-born, her father brought a cassette player to the hospital and instructed the nurses to play the recording of Charlie Parker with Strings. With the consent of her mother, Fulton’s father thought that the music of Bird (Parker) would be a positive influence on their young daughter’s development. Their goal was to make a positive connection between Charlie Parker’s brilliant improvisations and Fulton’s blissful subconscious experience as a newborn bonding with her mother. Fulton proudly recalled in an interview with podcast DJ Jason Crane, that the first poster she ever owned was of Charlie Parker, and that she still proudly displays that poster in her midtown Manhattan apartment. As a young child, she grew to focus on the music of vocalist Dinah Washington: “I loved her singing – no nonsense, so straight ahead, a big sound. She was very balls to the walls and I like that.” Fulton later fell in love with the sounds of Sarah Vaughan and Billy Holiday. As a pianist she has been particularly influenced as a pianist by Wynton Kelley, Red Garland, Count Basie and Bud Powell.

Fulton always knew that she would be a musician. She grew up in a musical household surrounded by the sounds of jazz. Her father was the director of the Clark Terry Summer Camps and later on led the Clark Terry Institute of Jazz Studies. Along with Clark Terry, renowned old-school players like Marshal Royal, Snooky Young, Major Holley, Butch Miles and Red Holloway would visit her house “all the time” to rehearse and hang out. Fulton considers herself “lucky because things aligned for me so that I could become exactly what I wanted – a jazz musician.”

Clark Terry—a true jazz legend—was a personal friend of the Fulton family. He is regarded as one of the most important trumpeters of the swing era, a featured member of both Ellington and Basie bands and a creatively brilliant contributor to hundreds of recordings. He gave Fulton her first compact disk, Louis Armstrong plays the Disney Songbook, as well as music theory lessons at the dinner table. Her first gig was at age 10 when she performed at Terry’s 75th birthday party. Fulton says that when she “mentions Clark’s name, people recognize his importance because he made the music accessible to so many people.”  Like Terry, Fulton’s music conveys optimism, humor and unabashed accessibility. In an All About Jazz review praising her most recent album, the writer states that Fulton is “an artist who radiates the joy of creation with [her] luminescent personality.”

Fulton’s touring schedule is unrelenting. She says “she loves traveling and being on the road” and eagerly accepts gigs around the world. She also makes a point of traveling with her steady rhythm section whenever possible. A partial list of the countries where Fulton has performed includes England, Scotland, France, Germany, Bulgaria, Israel, Italy, Ireland, Belgium, Spain, Canada and the US. She has played most of the major clubs and festivals around the world, including residencies at the renowned Carlyle Hotel in New York. When asked by Jason Crane about her plan for the next five years, she states, “I’m happy with the way things are going,” then laughed and said “my plan, in general, for the rest of my life (my 60 year plan) is to keep doing what I’m doing!”

For her concert at the Vermont Jazz Center on January 18th, she will be joined by her father, Stephen Fulton, on flugelhorn. Mr. Fulton is an acclaimed jazz educator who cut his teeth playing with Woody Herman’s Band and the Glen Miller Orchestra. He has performed at festivals around the world with such jazz luminaries as Sonny Stitt, Al Grey, Clark Terry, Frank Wess and many others. Champian Fulton’s rhythm section includes Hide Tanaka, who she considers “one of the best bass players in New York City.” Tanaka was a four-year member of Barry Harris’ house rhythm section at the Jazz Cultural Theater; he has performed with jazz legends Walter Bishop, Jr., Hank Mobley, Cecil Payne, Jaki Byard and many others. Tanaka is perhaps best known for his fourteen-year tenure with piano master Junior Mance. The drummer in the group is Fukushi Tainaka, who is best known for his thirty-plus year association with saxophonist Lou Donaldson. He has also performed and/or recorded with Dizzy Gillespie, Woody Shaw, Kenny Garret, Junior Cook, Dr. Lonnie Smith, Rufus Reid, Jimmy Heath, James Moody, Frank Wess and many others.

Come to the Jazz Center on Saturday, January 18th and bask in the sounds of the Champian Fulton Quartet. NEPR jazz DJ Tom Reney states “Champian Fulton swings! She’s a fine singer and a highly skilled pianist with impeccable taste in tunes. Champian’s also a refreshingly warm and gracious stage presence.” The VJC is grateful to former board member Beth Logan Raffeld and Philip Khoury for sponsoring this event. Beth and Philip are tireless advocates who have assisted the VJC in their efforts to honor the great tradition of jazz vocalists for many years. The January 18th, 8:00 PM concert will likely sell out, so be sure to purchase tickets in advance. The VJC is thankful for the ongoing support of Holiday Inn Express Suites of Brattleboro.  Publicity is underwritten by the Brattleboro Reformer, WVPR, WVEW, WNPR and WFCR.

Tickets for the Champian Fulton Quartet at the Vermont Jazz Center are $20+ general admission, $15 for students with I.D. (contact VJC about educational discounts); available online at www.vtjazz.org, by email at ginger@vtjazz.org, and at In the Moment in Brattleboro.  Tickets can also be reserved by calling the Vermont Jazz Center ticket line at 802-254-9088, ext. 1. Handicapped access is available by calling the VJC at 802 254 9088.

When your Lover Has Gone (audio only)

If I Had You

You’d be So Nice to Come To