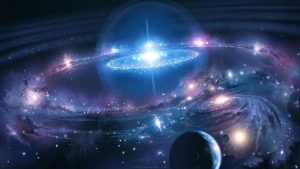 The Drake equation was written in 1961 by astrophysicist Frank Drake to estimate the number of intelligent civilizations in the Milky Way galaxy. The equation summarizes the main concepts which scientists must contemplate when considering the question of other communicative life.

Drake’s original meeting concluded that there were probably between 1000 and 100,000,000 civilizations in the galaxy.

The Drake equation can give a very wide range of values, depending on the assumptions, as the values used by Drake are not well established. The result can be # ≪ 1, meaning we are likely alone in the galaxy, or # ≫ 1, implying there are many civilizations. The presence of humanity implies a probability of intelligence arising of greater than zero. (Assuming that humanity is actually intelligent).