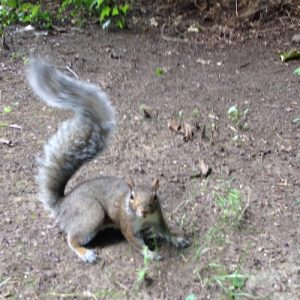 I’ve had an opportunity to drive around a bit more than usual, and one thing that pretty clear: there are a lot of dead animals on the road right now.

Skunks and squirrels seem to be the primary victims. They are all over, but also concentrated in some places. There’s a spot on Putney Rd where quite a few have failed to make it all the way across. There’s a place along Rt 30 near the bridge that also seems to have a bit of a pileup.

I blame drivers. Why? Because I’ve had both skunks and squirrels run out in front of me recently and I’ve been able to stop for them.

A few tips for reducing the roadkill:

As someone who really likes animals, it’s depressing to drive around right now. There are patches of smushed fur and guts all over the town.  If this many pedestrians had been killed, we’d ban driving altogether until we found a solution.

So, on behalf of small animals who asked me to write this, drive carefully and stop running them over. They thank you in advance.