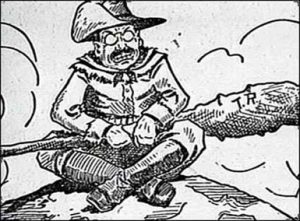 Achieving this quantity of energy in a bomb motivated scientists in the early years of WWII to figure out how to do it. In July of 1945, they achieved this goal.

Using conventional explosives, they were able to compress a sesame seed size piece of plutonium into the equivalent of 18 thousand tons of dynamite, and the atomic age was born.

In 1900, Theodore Roosevelt wrote “Speak softly and carry a big stick”, referring to the ability to use violence or force if necessary. The phrase is supposed to encourage people to avoid aggression by using caution but also to have a weapon at the ready.

The United States didn’t waste any time. Interpreting the word “carry” to mean “wield”, they detonated two nuclear weapons over the Japanese cities of Hiroshima and Nagasaki on August 6 and 9, 1945. The two bombings killed 226,000 people, mostly civilians, and remain the only use of nuclear weapons in armed conflict to this day. (FWIW, the population of Vermont is about 625,000).