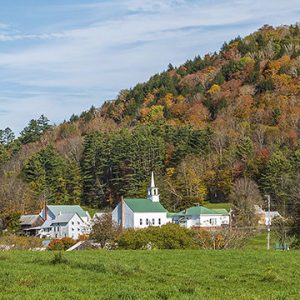 Four Vermont towns – Royalton, Sharon, Strafford, and Tunbridge – have been placed on the latest list of endangered historic places.

“America’s 11 Most Endangered Historic Places is an annual list that spotlights important examples of our nation’s architectural and cultural heritage that are at risk of destruction or irreparable damage” says their announcement.  Route 66, Mount Vernon, and other sites are on the list.

The Vermont towns are in a special category called “watch status” which indicates that a specific threat seems to be growing, but can be avoided or controlled with collaboration and innovation.

“The charming village centers and idyllic surrounding farms and forests in four historic towns would be permanently altered by a development proposal calling for construction of a new planned community in this rural part of Vermont” says the report.

A NewVistas is a cluster of fifty similarly designed communities. Each 2.88 square mile community is design based on a pattern and community governance guidelines designed in 1833, which has only been partially implemented in a few U.S. municipalities. Each community is adjacent to each other in order to create a larger, more complete, human settlement and a broader, more diversified, economy. Each has a population of fifteen to twenty thousand people. When 50 or more communities are linked, a truly self-sustaining economy can result. All elements of the NewVistas model are designed to encourage prosperous and sustainable low impact living in harmony with the environment.

The 1883 plan comes from Joseph Smith, founder of the Mormon church, and shows how ideal Mormon settlements should be laid out. His plan calls for starting with one 20,000 person city, then others, ultimately connected up to a million people. (The Mormon church, it’s been reported, is against this project.)

Vermonters are fighting back. The Alliance for Vermont Communities is an organization working to protect the threatened Vermont towns, farms, and forests.

While AVC supports the concept of sustainable development, Mr. Hall’s NewVistas plan is not a sustainable solution for Vermont.  NewVistas would destroy our rural landscapes, natural resources, and disrupt our local economies.  The environmental, economic and social impacts of a NewVistas development would erase our history, erode our culture, cheapen our craftsmanship, and eliminate our relationship to the land by destroying it.  It is an example of how the power of money and the single vision of a wealthy man can be used to drown out the voices of the local communities.

NewVistas is a long-term project. Battle lines have been drawn. The fight is just beginning.