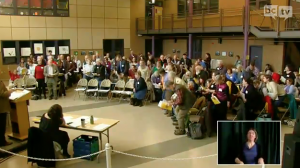 Representatives are filing in and getting settled, as are those of us who plan on covering today’s event. I have to say, I’m pretty tired from all the work on the new site, so I especially apologize in advance for spelling errors and such.

Usually, however, as they get into the more interesting debates of the day, this becomes less of a chore and more fun. I’m counting on it today.

One new development – a new seating arrangement is being tried this year. Instead of a rectangular arrangement, it’s a bit more of a circle. Folks are hoping this helps people see and hear better, and possible improve discussions.

They’ll be doing preliminary announcements and such for a while. We’ll pick up when they start discussing and voting on articles.