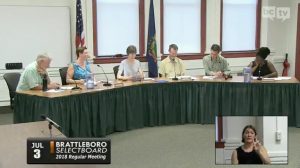 Taxes are going up, as they always seem to do. The Brattleboro Selectboard adopted the FY19 tax rates for property owners that were approved by Representative Town Meeting representatives earlier this year.  The $14.8 million budget includes both the essential items suggested by the Selectboard as well as some optional extras added in by the representatives.

There’s also a new community collaboration that you can be a part of. Project CARE is a new effort in Brattleboro to help addicts recover and do well.

And, in case you are curious, setting the tax rate during a heat wave calls for casual attire.

Chair Kate O’Connor reminded everyone about the Fourth of July celebrations, from the parade downtown and family activities and fireworks at Living Memorial Park at 9:30 pm.  “Bring water and sunscreen.”

For selectboard comments and committee reports, Shanta Lee Gander asked if the regular monthly meetings of the compassion committee could be included in the Selectboard’s monthly calendar.  It will, promised David Schoales.

Tim Wessel said that he and Schoales had toured the new solar array at the Windham Solid Waste Management District. “It’s fantastic, and now online.” Wessel said he was also impressed by the composting facility.

Schoales praised Wessel’s photography of the trip, and said that he had sent the photos on to newspapers but didn’t know if they’d use them.

Starr said there would be safe opportunities for people to surrender drugs and paraphernalia to the police without arrest. There will be counselors available, special drop-in hours, recovery coaches and more.

“It’s a really brief overview,” she said, adding that it was a response to people in the community wanting to see a more holistic response to the problems.

The way to learn more, she said, is to come to a free community cookout on July 13, from 11 to 1pm at the Preston Lot on Flat Street. Everyone is invited to come get more info, talk with the partnering organizations, have food, make donations, and otherwise get involved. “The hope is the community comes out to learn and be excited by this project.”

Wessel appreciated that many parts of the community were coming together for this effort.

Gander added that “People complain, but don’t have a solution. Here’s a way to get involved.”

All of the public, it appears, were off at the swimmin’ hole.

The Brattleboro Selectboard officially adopted the FY19 property tax rates necessary to fund the General Fund budget. Town Manager Peter Elwell reviewed the new rates and their implications for the board before they made their decision.

First, though, he issued an apology for sending out incorrect numbers earlier in the day. Rates were being calculated and double-checked right up until midday Tuesday, went they were shared with the public. A bit later in the day, a revision was issued, as a small error had been identified.

It was, if there is such a thing, a true accounting nail-biter, which ultimately resulted in a tiny bit of savings for taxpayers. “About $2 per $100,000 of assessed value,” said Elwell.

Elwell used the new, correct, up-to-date rates for his presentation to the board.

He reminded them that the budget they originally proposed a 3.6 cent increase to Representative Town Meeting.

Representatives added to the budget, however, before adopting a $14,798,643 budget.  The skatepark received an unexpected donation and a second sidewalk snowplow was purchased, said Elwell.

The RTM-approved budget requires a rate of $1.2746 to be assessed to pay for it. This is an increase of 5.51 cents over the previous year.

If your property is within the designated downtown area (DID), add another $0.1281 to cover $78,000 for the Downtown Brattleboro Alliance’s work.

If your property is within Tri-Park, there is an additional special assessment rate of $6.8785 to cover the costs of recent utility upgrades.

That takes care of Brattleboro. The State of Vermont adds additional property taxes for education, which the board also approved.

All of these rates are assessed per $100 of property.

So What Does This Cost?

“Is ‘non-residential’ non-houses?” asked Gander. Elwell said it was commercial properties and apartments, and non-primary residences.

Wessel asked to see how the school tax had changed from the previous year. Elwell pointed it out on the handout, noting that the Homestead rate had dropped by 1.5 cents and non-residential was increasing by 5.6 cents.

The non-attending public was asked if they had any comments. Unsurprisingly, there were none, and the rates were adopted.