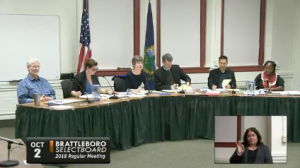 Tonight’s meeting of the Brattleboro Selectboard is being live blogged here as it happens. For fun!