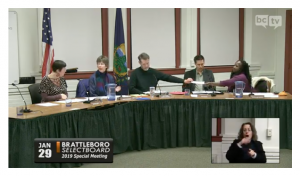 Representatives from the arts community, meanwhile, asked that an article requesting 2% of the Rooms & Meals tax be allocated for an Arts Fund for public arts projects, $8,424, be placed on the Representative Town Meeting Warning. The board said no, telling them it was hasty and didn’t have enough detail.

During Public Participation, Dick Degray said that there are races in local elections. “It’s a great thing for the community. I hope we have a 70% turnout.”

Arlene Distler, for the arts, said that there is a new idea of a standalone group that would look at proposals and make decisions, as well as administer the funds. It would be members of the Arts Council, Town Arts Community, and maybe others. She said they also propose that the DBA and Chamber funds (10%) for promotion be used to fund this, so promotion would get 8% and arts would get 2%.

Tim Wessel asked about that new idea of coming from the promotion funds. Distler said the arts were a major part of what gets promoted, and deserved funding.

Wessel said he supported the arts, but not this idea. The DBA proposal is for promotion of Brattleboro, he said. It has a direct tie to the Rooms & Meals tax. “Public arts are wonderful which can bring visitors, and the DBA should choose to use their funds to support arts. I believe the DBA should use money to support the arts. Our view is these funds are for promotion of all Brattleboro.”

He said another objection is that it seems hasty and opens up the question of what else the board should support with Rooms & Meals funds. Why not energy or recreation? “The selectboard shouldn’t be in the position of parceling out little bits of this. We’ll check on the DBA each year and see how they use the funds.” He said arts support should come from the DBA. “Property tax goes to 83% of what needs to be paid for. I just don’t think this is the funding mechanism for the arts.”

Shanta Lee Gander said she was confused. “I’ve seen come people for arts events and stay over night, and go to restaurants. Had the DBA/Chamber proposal had a component for arts I would have been more supportive of it.” She said she trusts DBA. “I know they do good work. I question the inclusivity of some of the things they do. There was an idea of shoeshiners at the parking garage… I’m not sure they are the group doling out money for the creative economy.”

Kate O’Connor said each proposal could be funded. “It doesn’t have to be attached to the DBA 10%. They are not competing things.”

Distler said she does marketing. “Why not give it to energy or recreation? They are funded already! Arts are zero funded by the  Town.”

Brenda Siegel said they shoud vote to send it to Representative Town Meeting. “Several towns across the state have added arts fund to grow the economy. Montpelier just added 29k for the arts. Arts and the economy are related, and constituents in Brattleboro should decide.”

Brandie Starr said she feels it needs to be given RTM.” I’d be inclined to send it so you can bring it from the floor, or we vote it to be on the warning.”  Gander agrees.

“If it is to be voted on RTM this year, then it has to be on the warning,” warned Town Manager Elwell.  “To be binding.”

Kate O’Connor said that “hen we bring it to RTM, it needs to be a fleshed out proposal, and we don’t know who to write a check to right now.” She said they needed more information.

Zon Eastes spoke up for arts funding. “Near Seattle, I ran an arts council. Washington uses the same tax, and a certain percentage has to be used for arts and tourism promotion. Towns get funds. Committees decide how to spend it.” He said it was a great way to get community talking, and showing arts and tourism working together.

Lissa Weinman  said she came last week to learn about the $42,000 plan for promotion and walked out not knowing what it was. “The DBA and Chamber have a track record, but they didn’t present a plan for how to spend an additional $42k. Not taking issue with it. You say the arts proposal was hasty? Yes, people didn’t even know they could ask. The general public had no idea there might be funding available. Town Plan and numerous discussions point to need for public funding of arts projects that will draw tourists. What are you promoting? The work of creatives who make this an arts destination.”

She said they have shows at 118 Elliot. “We pay $9k in taxes every year. Local artists need to be nurtured, and need support. Kind of incredible that Brattleboro can’t put 2% towards arts, but can put $42k for promoting…what?”

She suggested that the 2%, if it wasn’t able to go to the Arts Committee, go to an established project, her own Brattleboro Words project. O’Connor and Wessel said they could vote on that without it being proposerly warned. Weinman then strongly supported giving funds to the arts.

Wessel said the board could support the arts in many ways, and this is just one way to do it, presented at the last minute. “It’s not together enough. We haven’t denied any funding for arts in past 2 years. This is just rushed. The rooms and meals revenue comes from restaurants and bars and such, and artists can go to the DBA asking for funds. This isn’t the mechanism.”

Gander disagreed that the DBA and Chamber proposal was any better. She and Starr supported sending it to Representative Town Meeting.

Franz Reichsman says the finance committee hasn’t had a chance to talk about it, but he thinks that it is important to be consistant. “The details have not been worked out, and doesn’t meet the standard for budget decisions, just like the previous DBA/Chamber proposal.”

Tim said DBA and Chamber clearly have a track record, and this says funds go to “the arts fund.”

Schoales isn’t there, so a tie means it fails.

“What happens if budget passes and article fails?” asked Reichsman.

“We’d address that at RTM, said Elwell.  “As currently prepared, they get dealt with before we vote on the budget at the meeting, so we can amend the budget to meet decisions made during the meeting.” He said 8-12 items are like this.

Franz pointed out that the questions changes, then, from whether it should be done to how much to fund. “Town meeting weighs in on the funding source, but it is a different question whether to fund it at all.“

Wessel suggested a slight rewording to Article 23 regarding support for limited self governance, having RTM join the board in strongly supporting the idea.

Elwell made note that the school board will put out its own warning this year due to lawsuits and Act 46 uncertainty, etc. Other matters will come at end of meeting.