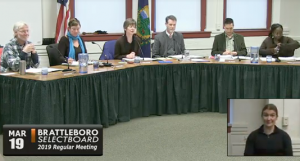 The Brattleboro Selectboard gathered for their last regular meeting under the current configuration of board members – Chair Kate O’Connor and Shanta Lee Gander are about to return to civilian life.

The Country Club was reprimanded for a liquor infraction, causing the board to offer them time to do some free promotion. (Note to other liquor license holders – minor infractions will lead to publicity!) Bids were accepted, the Energy Committee was reduced in size, and representative town meeting motions were assigned.