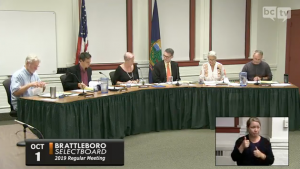 The Brattleboro Selectboard learned the tales of five nearby municipal broadband projects and expressed varying levels of support for something local, along with many questions. Some answers will come at their next meeting.

The Work Today program is being delayed until spring 2020, the parking garage will get a new elevator cab, the DPW will get their generator, and the Town hopes to get some volunteers for committees.

Take the poll. How is your Brattleboro broadband?

My internet speed in Brattleboro is usually