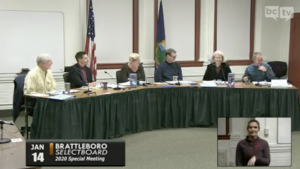 The board dove in to talk about upgrades at Living Memorial Park’s pool. There was also a big stink about diapers.