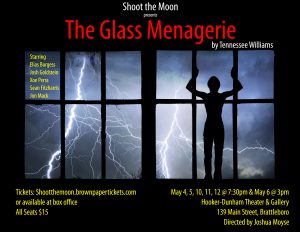 Shoot The Moon Theater Company opens its 2018 season with a production of “The Glass Menagerie” at the Hooker-Dunham Theater, Friday through Sunday, May 4-6, and Thursday through Saturday May 10-12.

This 1944 memory play that established Tennessee Williams as a major literary voice continues to be a staple in the repertory of most theater companies, including regular productions on Broadway. But artistic director Josh Moyse admits the choice is uncharacteristic for Shoot The Moon, which has forged its reputation on original works and literary adaptations

“It almost feels like cheating. I turn the page and the words are already there,” says Moyse.

Moyse says the original inspiration for choosing the show came from the acting class he teaches at Landmark College. A student who identifies as gender-neutral performed the opening monologue by lead character, Tom Wingfield, in drag, adding a contemporary layer to the subtext of Tom’s ambiguous sexuality, and the dynamic that plays out between Tom, his mother, Amanda, and his sister, Laura.

To that end, Moyse has cast regular company member Josh Goldstein in the role of Amanda, who domineers over her children, Tom (played by Elias Burgess) and Laura (Xoe Perra), both in advance of, and during, a visit by Jim O’Connor (Sean Fitzharris). Tom has invited O’Connor to the house with the hope that he will become a husband to Laura, which would free him from his responsibility as the family provider. In addition to the cast, Jon Mack provides on-stage musical accompaniment and Alistair Follansbee serves as stage manager for the production

Beyond the casting, Moyse promised the stage conception he and production designer Colin Grube have devised promises to be a completely new experience for audience members who may be familiar with the Hooker-Dunham’s theater space. Though he was reluctant to reveal much beyond an affinity for funhouse-style mirrors that “bend the way we see things.”

“In his foreword to the play, Williams wrote of the need for a new ‘Plastic Theater,’” says Moyse. “Traditional plays with traditional sets are a thing of the past, according to Williams, and the artists’ mission is to get closer to the truth by whatever means they can.”

General Admission is $15. Tickets can purchased in advance at shootthemoon.brownpapertickets.com. Members of Brattleboro Museum and Art Center can purchase a ticket for $13 at the door. Show time for each performance is 7:30 p.m., except for the 3:00 p.m. matinee on Sunday, May 6.

For more information about the production, visit www.shootthemoontheater.com.