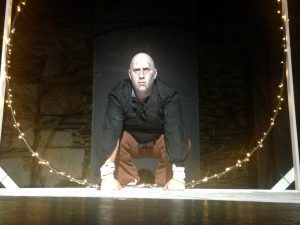 The final two showings of Shoot the Moon Theater Company’s “Frankenstein” at the Hooker-Dunham Theater are at 7:30 p.m. this Friday and Saturday, November 2-3.

General admission is $12. Reservations are recommended and can be made by calling 802-254-9276. The Hooker-Dunham Theater & Gallery is located at 139 Main Street in Brattleboro, Vermont. More information is available at www.hookerdunham.org.

Themes explored in this production are further fleshed out with a set design inspired by Leonardo da Vinci’s famous “Vitruvian Man” drawing as well as Lewis Carroll’s “Through the Looking Glass,” while the creature’s make-up is modeled after Francis Bacon’s “The Life Mask of William Blake” portrait.
Creative director Joshua Moyse says even though his primary source for his stage adaptation is the 1931 film directed by James Whale, audience members will recognize elements from Mary Shelley’s novel and other versions of the classic tale about the mad scientist and his monstrous creation.

“You could say I have Frankenstein’d “Frankenstein” by stitching all these allusions and homages together with some original scenes,” explains Moyse. “But we chose the film that made Boris Karloff a star as our model because it allows us to be more over the top.”

While Shoot the Moon’s previous Halloween shows have never shied away from the campier aspects of horror classics like “Dracula” or “Dr. Jekyll and Mr. Hyde,” Moyse says the company really wanted to play up the melodrama for this version.

That includes molding brains out peach gelatin and spattering fake blood in a manner that may not be suitable for a younger audience. “The production is very funny, but combined with terror,” Moyse cautions.

Shoot the Moon Theater Company is the company in-residence at Hooker-Dunham Theater. It committed to bringing high-quality productions of original and contemporary works to theater audiences in the region. For more information, visit www.shootthemoontheater.com.