“A house divided against itself cannot stand.” – Abraham Lincoln 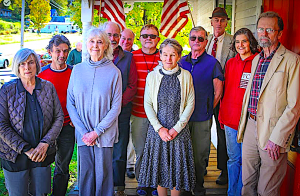 For its fall production, Guilford Center Stage will present a staged reading of”It Can’t Happen Here” by Sinclair Lewis. There will be three performances October 18-20 at Broad Brook Community Center in Guilford.

Todd Mandell and Richard Wizansky will direct a cast of 11 community actors in this adaptation for the stage by Tony Taccone and Bennett S. Cohen.

In keeping with its mission to present works which are place-based, the producers chose this work both for its topical theme and because Sinclair Lewis was living in Vermont when he wrote the book in 1935. In fact, the play is set in a fictional Vermont town.

Sinclair Lewis was already one of America’s most famous authors, known for the social commentary of such novels as Main Street, Babbit and Arrowsmith, when his wife, noted journalist, Dorothy Thompson, visited Nazi Germany in 1931. She interviewed Adolf Hitler, about whom Americans knew little, and sounded the first major warnings about the dangerous political situation there. As a result of her work, Lewis wrote It Can’t Happen Here.

In the play, a demagogue, Berzelius “Buzz” Windrip, is elected President of the United States, after fomenting fear and promising drastic economic and social reforms while promoting a return to patriotism and “traditional” values. The character of Windrip was directly modeled on Louisiana politician Huey Long, who was planning to run as a populist in the 1936 Presidential election. But the correlation to the rise of Fascism in Europe was the larger message, with many Americans hopefully saying, “It can’t happen here!”

The work has found a certain resonance in the current political climate. After the 2016 election, retailers reported a run on copies of the novel. Actors rehearsing for this production have expressed amazement —— and some concern! —— because many of the 84-year-old lines and situations seem drawn from current news stories.

Performances are Friday, October 18 and Saturday, October 19 at 7:30 pm, and Sunday, October 20 at 2:00 pm. The Friday show is a benefit for Broad Brook Community Center.

The Community Center is located at 3940 Guilford Center Road. Although the entrance to the first floor and restrooms are now fully accessible, the theater is up a flight of stairs at present.

Advance tickets are available, and are the method used to purchase tickets using a credit card. General Admission by cash or check is $12 at the door. For advance tickets visit brownpapertickets at: bpt.me/4058965 or by calling 800-838-3006. More about Guilford Center Stage may be found at: facebook.com/GuilfordCenterStage.