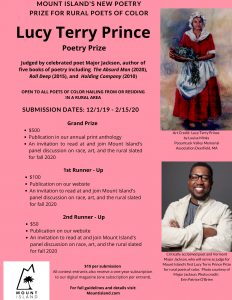 If you are not a poet, but know someone who might be interested, please re-share. This prize honors the life of Lucy Terry Prince who was an orator, activist, and first known African American poet in the U.S. This prize is being judged by celebrated poet Major Jackson who has authored five books of poetry collections and received a range of fellowships. Any individual who is a poet of color hailing from or living in a rural place is welcome to apply.