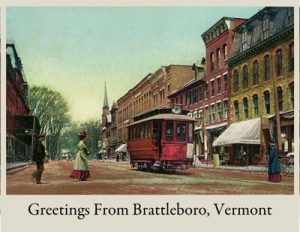 The first step was to meet with exhibit team. This is a group of dedicated BHS volunteers and board members, all experts in varying aspects of Brattleboro’s story. Our first goal was to narrow the broad topic of “Brattleboro” to something a bit more manageable. We had a few clues provided by VHS, such as telling us to expect lots of school children and grandparents to come through the exhibit.

One early idea was to show how kids lived in different eras, from pre-European colonists to the modern day.  Another idea was to limit our look at Brattleboro to a single topic, such as factories.

In the end, the decision was made to focus on a time period: 1870-1920. It’s a great time, historically speaking, in which Brattleboro grew from a dusty little town into the place we pretty much recognize today. Main Street buildings we know went up (Brooks House, Crosby Block, etc.,) there were steady technological advances, and personal transportation switched from horses to cars.

We then worked on an organizational structure to tell the story. Thinking of that time period, and world’s fairs and Valley Fair, we decided to divide the topic into four sections, much like pavilions or exhibits at a fair. Geography & Transportation, Downtown & Main Street, Industry & Commerce, and Arts & Culture would be our main topics.

The exhibit will fill an entire gallery room at VHS. Our plan calls for some large panels that tell the overall story, some larger framed items, then a series of smaller panels that can be paged through for each topic. We’ll have some artifacts on display, a large floor map of Brattleboro from the 1890’s showing downtown businesses, and plan to give away a postcard about Brattleboro so visitors can continue to be reminded of here after they leave the exhibit.

With the exhibit concept defined and a structure to follow, we set out on writing the exhibit story. This began with brainstorming and listing of everything interesting about our era, by topic. It was a noun dump, and we ended up with a long list of everything we should try to mention and why. We were also able to rule out some interesting itmes that didn’t fit within our dates. Constraints can be helpful in design.

Research followed, nailing down additional names, dates, and other details.

A draft of the exhibit story was then written, and re-written. Various members of the team checked facts, did proofreading, and final edits. Others selected images to accompany the story. Captions had to be written in much the same way. There were, as wordsmiths would expect, healthy arguments about how best to describe an person, place or event. If we say our exhbit era was “prosperous” does that imply that at other times we are not?

Panel layout came next. All of this work had to be made presentable. This meant choosing typefaces and colors, deciding on page layouts, adjusting text and images to fit, and making it easy to read. We wanted to keep sentences short and concise, and break up our long essay into smaller, easy to digest nuggets by adding subsection headers and such.

Whle all of this was underway, BHS embarked on a fundraising effort to help cover the costs of printing, displays, and so on. As I type, more and more local businesses and individuals are making contributions. The Chamber of Commerce, for example, has agreed to sponsor the postcard.

We’re not done yet. The panels are at the printer (we’re doing as much of this exhibit locally as possible), other items may be framed, and the exhibit team is now focused on filling up the stands holding the smaller flip panels and gathering artifacts for display. We have more captions to create, and a Thank You panel to print.

At the end of July, we’re loading it all into a truck and taking it to Montpelier for set-up.

Brattleboro did a lot of interesting things between 1870-1920 as you likely know. I hope you can get up to Montpelier to see this exhibit in its intended setting. This exhibit team is working quite hard to make it worth a visit.  (There’s a good possibility it may be on display when it returns to Brattleboro, too.)

If you have any questions, fire away….