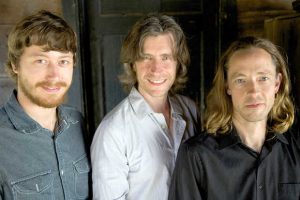 PUTNEY –  Next Stage Arts Project and Twilight Music present an evening of traditional and contemporary Celtic music featuring high energy bagpipes/fiddle/guitar trio Cantrip and folksinger/multi-instrumentalist Lindsay Straw at Next Stage on Saturday, April 21 at 7:30 pm.  The concert celebrates Cantrip’s 20th anniversary, with the band performing a mix of brand new music, as well as their entire 2001 album “Silver.”

From the strong base of its Celtic roots, Cantrip branches out into the music of other European cultures.  Weaving together songs and tunes, Dan Houghton, Jon Bews and Eric McDonald take an audience on a cultural journey, putting their own spin on each style.  Known for their innovative arrangements, un-produced sound and dry wit, Cantrip has toured throughout Scotland and the US, expanding the boundaries of Celtic music along the way.

Cantrip sprung from a local music session in Edinburgh, Scotland sixteen years ago. The band name is an Old Scots word meaning a charm, magic spell or piece of mischief, and it aptly describes the unexpected twists and turns in the trio’s musical arrangements as well as the compelling potency of their musicianship.  Dan Houghton (bagpipes, flute, whistles, guitar, vocals) was born in Ghana, but was transported to Scotland shortly thereafter, where he was surrounded by the indigenous music.  He has won the Scottish Lowland and Border Pipers’ Society Open Borderpipes and New Composition events, as well as the Maitre de Cornemuse at St. Chartier.  Jon Bews (fiddle, vocals) came to Scots music from a classical education by way of Goth rock.  He has performed and recorded with such diverse artists as Malinky, James Yorkston, Mikel Urdangarin, Ranarim, Deaf Mutes and Samling.  As a US native, Eric McDonald (guitar, mandolin, bouzouki, vocals) found his way to traditional music through the rich local music scene in Boston, and studies with guitarist/mandolinist John McGann and cellist Eugene Friesen at Berklee College of Music.

“Cantrip must have one of the strongest group personalities on the folk circuit. Their presentation is all energy as they channel modern swoops & slides of sound into the traditional repertoire. Their music comes from wild landscapes & wild places of the spirit.”  – The Orcadian

“One of the most intriguing sounds in Celtic music today. An instrumental sound that travels from the darkness to the light. An unmistakable and enormously versatile style. Cantrip both has its feet solidly in tradition, and sees innovation clearly from where it is standing.” – Celtic Beat Magazine

Ballads have been a source of inspiration for Lindsay Straw since her childhood in Montana, but she truly grew into the art while studying at the Berklee College of Music in Boston.  There she began to tie together the threads of the traditions she was most passionate about – English, Scottish, Irish and American songcraft.  Accompanying herself on guitar and bouzouki, Lindsay has toured throughout the US, Ireland and England.

Next Stage is located at 15 Kimball Hill in downtown Putney, VT.  Tickets are $20 Advance / $24 At the Door.  For information, call 802-387-0102.  Advance tickets are available at www.nextstagearts.org, Turn It Up in Brattleboro and Putney Food Co-op in Putney.  Next Stage will provide a beer and wine cash bar.  For more information, visit www.cantrip-music.com, www.lindsaystraw.com, www.twilightmusic.org and www.nextstagearts.org.