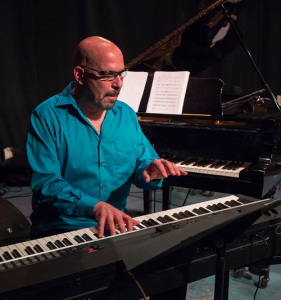 The Convergence Project to Perform at the Vermont Jazz Center, Saturday, June 9th at 8:00 PM

The Vermont Jazz Center presents Eugene Uman’s Convergence Project on June 9th at 8:00 PM.  The Director of the VJC, Uman and uses the Convergence Project as vehicle to present his original compositions and music that has influenced him – it includes Wanda Houston (vocals), Michael Zsoldos, saxophones; Jeff Galindo, trombone; Uman, piano; David Picchi, bass (electric and acoustic) and Jon Fisher on drums. There will also be surprise musical guests performing at this event.

After many musically formative years in Colombia, South America, Uman became drawn to blending the many rhythms of the country, such as cumbia, bambuco and pasillo, with jazz harmonies. While living in Antioquia, the Big Band of Medellín commissioned Uman to write for their 20-piece orchestra, resulting in Blues para Urabá.  The piece is, with its rousing climax using a rhythm called currulao from the Atlantic coast of Colombia, a tribute to the strength of the common people of Urabá who were, at that time, in the midst of a civil war.  After that intense experience, Uman delved even deeper into the rhythms and musical forms of his newly adopted homeland, while internalizing some of the many rhythms from the richly varied catalog of the country.

Uman returns regularly to Latin America and his relationship to Colombia, its people, and their highly developed art and music will never be shaken. His current focus, which is also the repertoire of the Convergence Project, has evolved into a personalized amalgam of jazz-influenced styles, consistently referencing Colombian rhythms, all the while giving greater voice to Uman’s love of vocal jazz, bebop, rock, gospel and funk roots. As Eugene puts it: “the music that I compose is a reflection of my accumulated experiences. It is affected by what I am currently paying attention to but is also strongly influenced by the listening and performing experiences of my formative years in rock, jazz, classical contexts. But probably most importantly, my writing is impacted by my observations of the natural world, emotional upheavals, current events, the sounds of where I have live and visit and what I am studying. The syntax and language I use is primarily informed by my jazz training and by observing and analyzing other musicians. The beauty of this jazz language is that it is utilized in a process that gives us numerous options. The improvisational (and compositional) vocabulary is both personal and based on a historical precedent that by definition gives us permission to blend styles and express innovation. This combination of options offers me and my band mates opportunities to riff off of given frameworks and take each composition towards new and exciting directions.”

This year’s concert will feature a handful of new compositions including “One for the Mothers,” an appreciation that is not always clearly articulated. Other new tunes are “Crazy Times,” a piece in 7/8 that will feature guitarist Archer Parks, as well as “Snowy Day Bossa” with lyrics by Verandah Porche and Patty Carpenter. The newest composition is “When Prayer’s Aren’t Enough,” written the day after the shooting at a high school in Santa Fe, Texas. The piece attempts to serve as both an homage to the young lives lost to gun violence in schools and a plea for legislative action. The title is directed at the comments of people in power who, in the face of gun violence, use prayer as an empty crutch. Uman suggests that the problem would be better managed though gun control and education and hopes that performing this composition will help to keep awareness of this dire situation in the spotlight.

At the core of the Convergence Project, is a rhythm section that can play authoritatively in a wide variety of styles while simultaneously “playing in the pocket.” Uman sought out musicians who bring a youthful, strong, yet sensitive voice to his compositions. He found this in a rhythm section he had originally met as friends while teaching at the University of Massachusetts (Amherst) in the early 2000s. Dave Picchi (bass) and Jon Fisher (drums) accepted the task of studying and assimilating Colombian rhythms into their own musical vocabularies. They are a rhythm team that brings a sense of unity cultivated from years of playing bass and drums together in numerous groups exploring a wide range of styles.

Originally from Chicago, Wanda Houston grew up singing gospel music in church and with her family’s theater group.  She has led an active career as an actress, performing on the grand stages of Los Angeles, Las Vegas and Broadway; she toured Europe as the wicked stepsister in Sisterella (for which she won “Best Supporting Actress in a Musical” by the NAACP) and has held lead roles in Ain’t Misbehavin’, Hello Dolly, and The Best Little Whorehouse in Texas.  Houston was part of the gospel group Broadway Inspirational Voices (BIV) with whom she performed on PBS’s Great Performances and earned a Grammy nomination. She has shared the stage with Oleta Adams, Patti Austin, Eartha Kitt, Liza Minelli, Pattie Labelle, Joe Cocker, Celine Dion and Barbara Streisand. Houston sings jazz with authenticity and passion; she is a great story-teller too – coloring the spaces between her songs with fascinating stories of her youth and the trials and tribulations of life on the road.

Trumpeter/Composer/Educator Jason Palmer is becoming one of the most in demand musicians of his generation. He has performed with Roy Haynes, Herbie Hancock, Jimmy Smith (the organist), Wynton Marsalis and the Lincoln Center Jazz Orchestra, Kurt Rosenwinkel (notably, Palmer is the first trumpeter to ever be hired by this highly acclaimed guitarist), Ravi Coltrane, Mark Turner, Jeff Ballard, Lee Konitz, Phil Woods, Common, Roy Hargrove, Lewis Nash, and more. Palmer received the 2014 French American Cultural Exchange Jazz Fellowship and was named a 2011 Fellow in Music Composition by the Massachusetts Cultural Council. He took First Place in the 2009 Carmine Caruso International Jazz Trumpet Solo Competition.  The June 2007 issue of Downbeat Magazine cited him as one of the “Top 25 trumpeters of the Future.” In addition to performing on over forty albums as a sideman, Palmer has recorded eight albums under his own name and is currently a Steeplechase Records Recording artist and three of his recordings have received four stars or better in Downbeat Magazine’s reviews. He is has toured over 30 countries with saxophonists Greg Osby, Grace Kelly, Matana Roberts, as well as being a featured guest artists on multiple projects.

Saxophonist Michael Zsoldos has performed with Paquito D’Rivera, Sheila Jordan, Ernie Watts, Matt Wilson, Rebecca Parris, and Jerry Bergonzi and has opened for piano legend McCoy Tyner. Zsoldos has arranged for and performed with the horn section of the Dartmouth Gospel Choir as well as Chicago’s One Accord.  He performed at the New Orleans Jazz Festival, Umbria, Napoli, Rome, Chicago’s House of Blues, Jazz at Lincoln Center and at the Obama Inauguration.  Zsoldos plays with the Discover Jazz Festival Big Band in Burlington, VT and the Vermont Jazz Center Big Band in Brattleboro, VT.  For six years, he also served as Band Director at Woodstock Union High School and Middle School and is currently on the teaching faculties of Castleton State College and Interplay Jazz Camp.

Born in San Francisco, California, Jeff Galindo attended Berklee College of Music in Boston, Massachusetts on scholarship after high school. He then studied with Hal Crook, Jerry Bergonzi, and George Garzone with grants by the National Endowment of the Arts and soon began free-lancing in the Boston area. His experience includes tours of Europe with Phil Woods and of Japan with Makoto Ozone, as well as tours with the Artie Shaw Orchestra, Irving Mayfield and the New Orleans Jazz Orchestra, and Robin McKelle. Galindo toured the world as the Trombonist and Musical Director with Esperanza Spalding and has performed with such notables as Chick Corea, Clark Terry, Joe Lovano, George Russell, Slide Hampton, and Johnny Griffin. He has also performed with Gunther Schuller, Ray Charles, Aretha Franklin, Jerry Bergonzi, Bobby Shew, The Boston Pops Orchestra, and the Village Vanguard Jazz Orchestra among many others. In Boston, Galindo performs regularly with the Greg Hopkins Big Band and Nonet, The Galindo/Phaneuf Sextet (with which he has released a cd Locking Horns in 1998 and won Boston Magazines “Best of Boston” for a jazz group in 1999; he then released a second cd, Talkin’ Horns, in 2013.  He is currently one of the top free-lancing trombonists in the Boston area.

David Picchi has been performing and teaching music throughout the Pioneer Valley since 2001. As an electric and double bass player who is skilled in multiple genres, he has been called to play on many diverse recording and performance projects. Picchi is the Administrative Director for the UMass Jazz in July Summer Music Programs, teaches at Amherst College and Mt. Holyoke College and contributes to the production, performance and educational programs at the HCC Jazz Festival, Northampton Jazz Festival, and the Vermont Jazz Center. He has performed or recorded with Karrin Allyson, Chocolate Peach, FlavaEvolution, the Leah Randozzo Group, Evelyn Harris, Chuck Langford, Yusef Lateef, Kevin Mahogany, Rebecca Holtz, Samirah Evans, Charles Neville, Dick Oatts, Arturo O’Farrill, Beau Sasser, Miro Sprague and many others.

The full ensemble offers new twists and interpretations of Uman’s familiar favorites while opening doors to the creation of new compositions with wide-spanning possibilities. Each musician brings his or her own distinctive personal approach to Uman’s music, uplifting it with innovative lines, hard-driving grooves, attention to dynamics, well-developed listening skills and a shared commitment to maximizing the music’s shape and substance.

Vermont Jazz Center presents the Convergence Project with special guests on Saturday, June 9th at 8:00 PM. The VJC is especially grateful for sponsorship of this event by the McKenzie Family Charitable Trust whose contribution has made this concert possible. The VJC is also grateful for the ongoing support from the Vermont Arts Council and the National Endowment for the Arts.  Hospitality for our artists is provided by the Hampton Inn of Brattleboro.  VJC publicity is underwritten by the Brattleboro Reformer, WVPR, WVEW, WFCR and Olga Peters of WKVT’s Green Mountain Mornings.

Tickets for the Convergence Project at the Vermont Jazz Center are $20+ general admission, $15 for students with I.D. (contact VJC about educational discounts); available at In the Moment in Brattleboro, or online at www.vtjazz.org, by email at ginger@vtjazz.org.  Tickets can also be reserved by calling the Vermont Jazz Center ticket line, 802-254-9088, ext. 1 or by visiting In the Moment Records on Main Street in Brattleboro.  Handicapped access is available by calling the VJC at 802 254 9088.