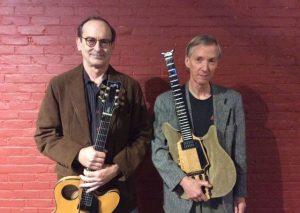 On Sunday, September 23, Stage 33 Live in conjunction with Black Sheep Radio presents an afternoon of world-class jazz, including a workshop and concert, with guitarists Draa Hobbs and John Stowell. The event takes place at Stage 33 Live at 33 Bridge Street in Bellows Falls, and ticket sales benefit the venue and the radio station, two non-profit community arts organizations serving the greater Bellows Falls area.

Following the workshop, at 4 p.m., Hobbs and Stowell will perform as a duo playing jazz standards and classic compositions by Duke Ellington, Billy Strayhorn, Dave Brubeck, and others. The concert includes a cash bar and light snacks by Athens Pizza, and a raffle to benefit Stage 33 Live and Black Sheep Radio.

Hobbs grew up in Chicago and has made his home in Southern Vermont since 1980, where he teaches at the Vermont Jazz Center, the Putney School, and offers private lessons. He studied music with the legendary Jimmy Raney, Attila Zoller, Gene Bertoncini, and Peter Lietch. Hobbs has enjoyed an active life performing in NYC, Burlington, Maine, and points in-between for the past 30 years and has shared the stage with many notable musicians including Don Friedman, Ron McClure, Eliot Zigmund, and Vic Juris.

Stowell, based on the West Coast, was influenced as much by pianists and horn players as he is by guitar players, and his original take on harmony, chords and improvisation sets him apart. He has taught internationally for over 40 years in every educational setting. The Los Angeles Times says, “Guitarist John Stowell’s style with standards is a delightful departure from the road well traveled. He transcends the label of jazz guitarist.”

Stage 33 Live, a non-profit arts organization founded in early-2018, features regional performers and presenters offering music, theater, performance, academic, and spoken-word events. All shows take place on a stage in the main room of 33 Bridge St., and events will be recorded and mixed for broadcast on WOOL and Falls Area Community Television (FACT TV), and for on-demand viewing at stage33live.com.

Black Sheep Radio WOOL-FM is a community-supported, non-profit radio station with studios in Bellows Falls. Founded as a licensed, low-power FM station in 2001, WOOL received its full-power Non-Commercial Educational (NCE) license from the Federal Communications Commission in 2014. The station airs no commercials and is fully supported by memberships, contributions, and underwriting. It broadcasts at 91.5 FM from a tower atop Mount Kilburn in New Hampshire and streams on-line.

Admission to the performance is $10 in advance, or $12 at the door. For the performance plus the workshop, admission is $40. Tickets are available at Village Square Book Sellers, located on the Square in Bellows Falls, and online at www.wool.fm or www.stage33live.com.

All ages are welcome, and 33 Bridge Street is an accessible space.