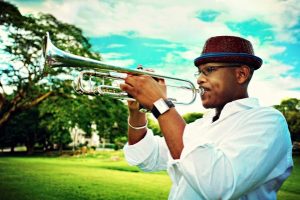 Etienne Charles and Creole Soul to Perform at the Vermont Jazz Center on Saturday, September 15th, 2018 at 8:00 PM

The Vermont Jazz Center is excited to lift off its 2018-19 concert season on Saturday September 15th with Trinidadian trumpeter, composer and percussionist, Etienne Charles. He will be flying in from Michigan to perform with his band Creole Soul.

Creole Soul is one the many projects that Etienne Charles uses to investigate and perform music that aligns with his Caribbean heritage. He uses this ensemble as a musical laboratory to mesh the roots music of indigenous cultures with the language and arrangements of jazz. Etienne has traveled the world, seeking connections and differences between the rhythms and forms of Caribbean folkloric music. His searches have led him to disparate regions throughout the Caribbean where he has reached out to local musicians, lived in their communities, eaten their food and created music together with them. Charles’ findings simultaneously illuminate musical connections between unexpected locales all while celebrating their cultural uniqueness. The results are a pleasure: fascinating arrangements and compelling melodies that take the listener to a rich, percussion-driven universe.

The ensemble that Charles is bringing to the Jazz Center reflects his multicultural approach, especially because in this iteration he will feature the acclaimed Venezuelan cuatrista Jorge Glem. Along with Glem on cuatro and Charles on percussion and trumpet, the ensemble includes Godwin Louis on alto sax, Julius Rodriguez on piano, Burniss Travis II on bass, and Kweku Sumbry on drum set.

Etienne Charles brings a lot to the table. Born on the Island of Trinidad in 1983, he holds a Master’s degree from the Juilliard School and a Bachelor’s degree from Florida State University. He is now an associate professor of music at Michigan State University and has been hailed by Jazz Times as “a daring improviser who delivers with heart wrenching lyricism.” According to Downbeat Magazine, he improvises with “the elegance of a world-class ballet dancer.” In June 2012, Etienne was written into the US Congressional Record for his musical contributions to Trinidad & Tobago and the world. In 2015 he received a Guggenheim fellowship. In 2016 he received a new works grant from Chamber Music America and was a featured panelist and performer at the White House Caribbean Heritage Month. He is also the recipient of the Jazz at Lincoln Center Millennial Swing Award. Perhaps more than any other musician of his generation or of Eastern Caribbean origin, Charles brings a careful study of myriad rhythms from the French, Spanish, English and Dutch speaking Caribbean to his own creative output. As a sideman he has performed and/or recorded with Monty Alexander, Roberta Flack, Frank Foster, Ralph MacDonald, Johnny Mandel, Wynton Marsalis, Marcus Roberts, Maria Schneider, Count Basie Orchestra, Eric Reed, Lord Blakie, David Rudder and many others.

Each of Charles’ successive records takes him deeper and deeper into understanding and communicating the experience, methods and structure of Caribbean music. He started to reveal his path in 2006 with Culture Shock, a recording which fuses Calypso and New Orleans vibes with a modern-jazz sensibility. His second album, Folklore (2009), tells stories from the point of view of traditional Trinidadian characters. In its promo-video, Charles explains how he “thought of the [folkloric] characters [of his youth] and gave them melodies. I wanted to bring the characters into the world the way I hear them.” This was followed by Kaiso in 2011. In the promo for that recording, Charles states: “Kaiso is an old West African word, and it comes from the form of encouragement you give to an artist while doing something: a fight or a dance or a song.  Kaiso: it’s what you would say when you enjoy something. It evolved over hundreds of years and it has becomes the reference [nick-name] for calypso [music].”  That record is a tribute to the history of Calypso and its great performers like Mighty Sparrow whose music, Charles believes, deserves to be listened to and honored. It is fascinating to know that Charles’ family is also part of the Calypso tradition:  his first professional experience in music was playing with his father and grandfather in their steel drum group.

Charles’ next album was 2013’s Creole Soul, which Etienne describes as “a melting pot of ideas, colors, sounds, tones.” He thought about what is means to be Creole and how that affected the people of the West Indies, New Orleans and other places where Creole families form the fabric of the community. He visited Haiti to gain insight into their Creole experience and their use of Haitian Creole as the nation’s official language. In the promo video for that disc, he reflected upon his journey by saying that “In the world we live in today, it’s impossible not to be a creole, it’s impossible not to have a blend of ideas, a blend of traditions, a blend of sounds that inspire or shape or determine who we are. There’s a little bit of creole in all of us. We all have a mix of feelings, of sounds of ideas and influences, a mix of doctrines. That’s what makes the world an amazing place where we can all be together.”

Charles’ most recent release is the San Jose Suite. In the promo video for that album, he explained his process: “it was a project that I did through composition and music to research the effects of colonialism in the New World. Specifically I chose three different countries, all with a city named San Jose, which meant that they were all formerly either occupied or colonized by the Spanish. So I chose Costa Rica, California in the United States and Trinidad which is where I am originally from…How do I connect [these three places]?…I did research on the African immigrants and the descendants of African immigrants in each place as well as the descendants of the indigenous people who still lived there.” Charles connects the dots and helps us understand the world through his experience: “I’m writing music that speaks to history because if you don’t know the history, what do you know? I think that now it’s our job to have documents that in many different ways portray the history of the Americas as they pertain to ‘the New World.’ I think that the more ways that you have to tell a story, the more people will understand the story.”

Come learn these stories through stories and serious grooves at the Vermont Jazz Center on Saturday September 15th and find out why JazzTimes critic Bill Milkowski has called Etienne Charles’ music “a fascinating, fully realized hybrid.” Calypso, funk, reggae and jazz music will postpone the chilly, fall winds of Vermont. Etienne Charles and his group will bring joyful sounds that make you want to dance and feel like carnival really does exist.

This concert is sponsored thanks to the huge heart and generosity of Beth Raffeld and Philip Khoury and by an anonymous friend of the VJC Educational Program. This concert and all the shows at the VJC are subsidized to make ticket prices affordable. The VJC is also thankful for the support of the Holiday Inn Express Suites of Brattleboro. VJC publicity is underwritten by the Brattleboro Reformer, WVPR, WVEW, and WFCR.

Tickets for Etienne Charles and Creole Soul at the Vermont Jazz Center are $20+ general admission, $15 for students with I.D. (contact VJC about educational discounts); available at In the Moment in Brattleboro, or online at www.vtjazz.org, by email at ginger@vtjazz.org.  Tickets can also be reserved by calling the Vermont Jazz Center ticket line, 802-254-9088, ext. 1. Handicapped access is available by calling the VJC at 802 254 9088.

If I could say that there was a thesis statement or something that ties it all together, my conclusion is basically this: Communities will continue to be formed no matter what happens with respect to colonialism…and when communities are formed and when they are strong, they can naturally resist adversity and bring changes to things that seem to be adverse. The other observation was that culture is the main identity of a society, the art is the main identity of a society. Where I’m from in Trinidad-Tobago, nobody thinks about oil. People think about calypso and steel pans, the food. When you think about the United States you don’t think about Silicon Valley, you think about rock and roll, jazz and blues. And as a result of that, it reminded me of the importance of teaching because the only way that a culture can survive through generations is through the art of “passing it on.”

Etienne Charles in a speech at Michigan State University, June 21, 2017

Charles has managed to bring to life a very vivid sense of the mystery, the magical realism — the luminous folklore of the Caribbean.

Video from Jazz Standard with band including Cuatro player

Who: Etienne Charles and Creole Soul

What: Calypso and other forms of rhythmically charged Caribbean jazz performed by a trumpeter/composer with a new vision.