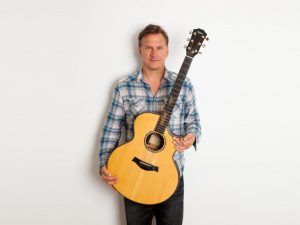 One of the leading voices in American songwriting, Ellis Paul was at the forefront of singer/songwriters that emerged from the Boston folk scene in the 1990s, creating a movement that revitalized the national acoustic music circuit with an urban, literate, folk pop style.  Though he remains among the most pop-friendly of today’s singer/songwriters – his songs regularly appear in hit movie and TV soundtracks – he has bridged the gulf between the modern folk sound and the populist traditions of Woody Guthrie and Pete Seeger more successfully than perhaps any of his songwriting peers.  With a probing humanism shaped in part by the five years he spent as a social worker, Ellis frames the most divisive issues of the day into starkly personal and emotional terms in his songs.

Drawn to Woody Guthrie’s social consciousness and the humanitarian streak that ran through his work, Ellis is committed to Guthrie’s legacy and a personally authentic performance style has influenced a generation of artists closer towards the realness of folk music.  In 1996, Ellis joined the likes of Bruce Springsteen, Billy Bragg, the Indigo Girls and Ani DiFranco in a ten day celebration of Woody’s work held at the Rock and Roll Hall of Fame, and presided over by Guthrie’s daughter Nora.  Later, when Guthrie’s hometown of Okemah, Oklahoma hosted the first Woody Guthrie Folk Festival in July, 1998, Paul was tapped as one of the headliners, and honored by being named an honorary citizen of Okemah in the process.  The connection with Guthrie continued into the new millennium when Nora Guthrie invited Ellis to put music to a set of her father’s lyrics.  He later participated in the “Ribbon of Highway” tour, a communal salute to Woody Guthrie featuring such luminaries as Arlo Guthrie, Marty Stuart, Ramblin’ Jack Ellott, Nanci Griffith, Guy Clark and Janis Ian. ​

Ellis has released 19 albums, but his writing extends beyond his extensive collection of songs.  “Notes from the Road” is his critically acclaimed book of essays on his life on the American folk circuit, lyrics from his albums, stray poems and sketches from his journals, and his film “3000 Miles” is part concert film, part documentary and part instructional video.  His first children’s book “The Hero in You” was published in 2014.  It is a picture book adaptation of his Parent’s Choice Gold Medal Award Winning children’s album of the same name.  Ellis’ music has been featured on hit TV shows Ed and MTV’s Real World and in the soundtracks of three Farrelly Brothers films – “Hall Pass,” “Me, Myself, & Irene” and “Shallow Hal.”  Ellis has received an honorary Doctor of Humane Letters degree from the University of Maine, and won an unprecedented 15 Boston Music Awards.

“Wise, tender, brilliant and biting, Ellis is one of our best human compasses, marking in melodies and poems where we’ve been and where we might go if we so choose.” – Nora Guthrie

Garrin Benfield’s sound has been described as freestyle acoustic rock.  His music is a blend of moody, guitar driven rock and polyrhythmic groove all run through the filter of a very serious singer/songwriter.  He flat-picks his way through complicated and lightning-fast arrangements, often using a Loop Station to create mesmerizing soundscapes, darkened by his extensive use of effect pedals.  Garrin has recorded five CDs of original music, and his song “What You’re Hiding” – a stark tribute to Matthew Shepard – was featured in a production of “The Laramie Project.”

Next Stage is located at 15 Kimball Hill in downtown Putney, VT.  Tickets are $20 Advance / $24 At the Door.  For information, call 802-387-0102.  Advance tickets are available at www.nextstagearts.org, Turn It Up in Brattleboro and Putney Food Co-op in Putney.  For more information, visit www.ellispaul.com, www.garrin.com, www.twilightmusic.org and www.nextstagearts.org.