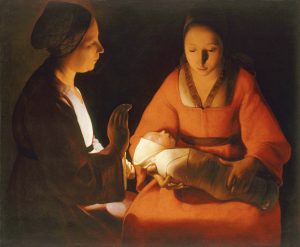 Guilford, Vt. — Friends of Music at Guilford (FOMAG) presents “Joyeux Noël,” its 46th Christmas at Christ Church program, at 7:30 on Friday, December 7, and again at 4:00 on Saturday, December 8. Traditional elements of this event include vocal and instrumental music of the season, an entertaining story with a holiday or winter theme, and a short carol sing.

This year’s program is dedicated in memory of Neil Quinn, who passed away in mid-September. He served as Guilford’s town moderator for many years and was a long-time member of Christ Church Guilford Society, the nonprofit group that maintains this historic site, performing much of that work himself. An avid cyclist and skier, he founded and ran the West Hill Shop in Putney from 1971 through 2004.
The sixteen-voice Guilford Chamber Singers begin the program with five traditional French carols and then Francis Poulenc’s Quatre Motets pour la saison de Noël (Four Christmas Motets), composed in 1952 and inspired by four scenes from the Nativity story. While the carols are sung in their original tongue, Poulenc set his motets to texts in Latin.
Led by Tom Baehr for a seventh season, the singers include sopranos Catie G. Berg, Christina Gibbons, Jenny Holan, and Elizabeth Lewis; altos Sarah Lott, Beth McKinney, Laurie Schneski, and Joy Wallens-Penford; tenors Steven John, Bill Johnson, Hal Kuhns, and Peter Tracy; and basses Peter Abell, Orion Barber, Calvin Farwell, and Tom Green. Instrumental interludes from the French repertoire are provided by a few Guilford Chamber Players.
The program’s dramatic reading, performed as usual by FOMAG founder Don McLean, is “Alone,” a new winter story by Guilford author Mimi Morton. A version of this tale first appeared in Vermont magazine in 2015 and is part of a collection inspired by the author’s love for Guilford, but all the characters are strictly fictional.
Everyone then joins in on a few seasonal carols before heading away into the night as the Christ Church bell tolls across Algiers Village.
Door donations at these performances are divided between FOMAG and Christ Church Guilford Society, a nonprofit that oversees the building’s preservation and manages its special-event use. Consecrated in 1818 as the first Episcopal church in Vermont, Christ Church has not had an active congregation since the early 1890s. A bicentennial birthday celebration last August included a sold-out benefit concert featuring Guilford residents Jaime Laredo and Sharon Robinson with a few of their noted colleagues.
Friends of Music, also offers a holiday boutique of concert CDs as well as several card series with images by local and regional artists whose work has been featured on posters and program books, some ideal for holiday greeting cards or gifts. FOMAG’s 53rd concert season enjoys media sponsorship by Vermont Public Radio and the Vermont Arts 2018-19 promotional efforts of the Vermont Arts Council.
For further information, contact the Friends of Music office at (802) 254-3600 or office@fomag.org; visit online at www.fomag.org.