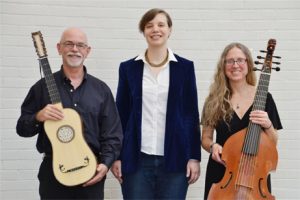 West Brattleboro, Vt. — At 7:30 p.m. on Saturday, March 9, tri-state fans of Early Music are invited to All Souls Church in West Brattleboro for “Love’s Harvest,” a benefit concert of airs, arias, madrigals, and tonos by the Night’s Black Bird trio from Allentown, Pennsylvania. Admission at the door is $15 per person and includes a gala reception; proceeds will help support ASC community-based programs and the Meeting House.

Members of Night’s Black Bird include Elizabeth Conner, bass viola da gamba, who received her B.M. in double bass performance at New England Conservatory and her M.M. at the University of Michigan. She has performed in numerous orchestras, concertized with many Early Music ensembles, and has been a frequent guest artist performing continuo on bass viola da gamba for both singers and instrumentalists. Elizabeth’s parents now live in Halifax, Vt. and attend All Souls Church.

Ted Conner, lute and Baroque guitar, holds a B.A. from Johns Hopkins, a B.M. from New England Conservatory, a M.M. from the University of Michago, and a Ph.D. from the University of Connecticut. He has performed on lute, viola da gamba, and Baroque guitar in many Early Music ensembles and on jazz guitar throughout the northeast. Dr. Conner is Professor of Music at Muhlenberg College, where he directs the Collegium Musicum and the Jazz Ensemble. He has published numerous articles on 16th- and 17th-century music, transcribed and edited music for lute and viola da gamba, and recently finished a textbook on jazz theory and improvisation.

Katherine Kaiser, voice, holds a Ph.D. in music history and theory, and has taught at Stony Brook University and Kutztown University. She is a member of the Bach Choir of Bethlehem; has performed solo cantatas with the Boston Early Music Festival; premiered works by Marc’Antonio Pasqualini at the Society for 17th Century Music; and has sung with the New York Continuo Collective and the Leipziger Vocalensemble, among other noted ensembles.

All Souls Church, aka West Village Meeting House, is at 29 South Street, across the road from the new West Brattleboro fire station and village common, a bit over a mile west of Exit 2 off I-91 along Rt. 9. Follow the wooded church driveway across from the fire station up to a large parking area. The facility is handicap-accessible; turn right on a paved lane at the top of the drive to reach a few handicap parking spots near the building’s two ramped entrances.