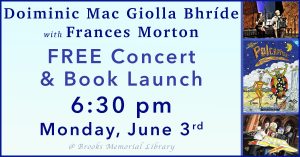 Join us at 6:30 pm on Monday, June 3rd, as we welcome internationally known Irish musician, Doiminic Mac Giolla Bhríde, and his partner, Frances Morton! They will be giving a FREE concert of his own sean-nós music, after introducing his second Irish-language children’s book, Polcaphonc. He will play a few fun songs from the book!

About the book: Polcaphonc (Polka Dot)
The Songbook/CD for kids by Dominic Mac Giolla Bhríde (from the artists who created Icí Pící), has English (Béarla) translations for each song.

Gweedore Native, Dominic Mac Giolla Bhríde, wrote and arranged the songs on the CD, which are performed by children from the Tír Conall Gaeltacht and Derry. Dominic wrote the lyrics for 14 of the songs, and 5 poets, Máire Dinny Wren, Art Hughes, Joe Ó Dónaill, Ray Mac Mánais, and Eoghan Mac Giolla Bhríde wrote the 6 others.

“Polcaphonc has songs for every kid!” says Bláthnaid, at the launch. “The music is funky, lively, and the songs deal with things that kids are actually interested in. The books has beautiful, attractive art, and kids everywhere are sure to be jamming non-stop!”

The songs cover many important subjects! In the first, there is an adventurer who’s crazy about fashion, especially anything with polka dots. In “Damhsa, Damhsa (Dance, Dance),” everyone will be on the floor showing off their funky footwork. “Fíodóir (Weaver),’’ is about a greedy spider, and in”Tamaí Taibhse (Tommy the Ghost),” this little ghost lives in a child’s sleeve.

There are serious songs too, with “Pleaisteach (Plastic),” which deals with the damage that plastic does to the environment, and ‘An Domhan (The World),” discussing pollution and non-renewable energy.

Dominic has is widely known as a singer in the sean-nós tradition, as well as from the notable success of Ící Pící, which was published in 2009.

“A lot of parents had been asking me when the next book would come out because they were tired of listening to Ící Pící,” says Dominic. “It took me nine years, but I’m quite pleased with the way it turned out. Every song is different — songs for dancing to, serious songs about environmental pollution, and plenty of songs about space adventurers.”