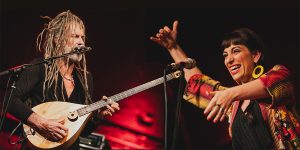 Next Stage Arts Project is delighted to present Sofía Rei & JC Maillard on Saturday, November 16  at 7:30 pm. Tickets are $22 in advance, $25 at the door, available now online at nextstagearts.org and at Turn It Up!, Brattleboro, the Putney General Store three weeks before the show.  Next Stage is located at 15 Kimball Hill, Putney, VT.

After 4 years in the works, Sofía Rei & JC Maillard‘s duo album “Keter” from John Zorn Masada was released in January 2019 on Tzadik records, with Sofía Rei on vocals, loops & charango and JC Maillard on saz bass, and vocals. For a quarter of a century, John Zorn’s Masada has been a consistently exciting and influential presence in the landscape of adventurous music, involving renowned artists such as Dave Douglas, Bill Frisell, Marc Ribot, Pat Metheny, John Medeski, Martin & Wood and many more. With this third and final songbook, The Book Beriah, he concludes the Masada series with 92 compositions over 11 albums, presented by some of the world’s most accomplished musicians.  In a unique project for voice and saz bass, longtime collaborators Sofia Rei and JC Maillard offer a superbly intimate and introspective study of the acclaimed source material. With lyrics by Rei and arrangements by both musicians, the songs explore a variety of topics, from love and solitude, to the ghost of Frida Kahlo and a childhood under dictatorship in Argentina. A captivating duet of unprecedented synergy, Keter has been coined “a standout addition to the Masada catalog”.

Sofía Rei is an award winning vocalist, songwriter and producer form Buenos Aires, Argentina and based in New York City. The Village Voice calls her the “…Leading light of Latin Jazz”.Her music explores connections between the various traditions of South American folklore, jazz and electronic sounds. She has collaborated with artists such as John Zorn, Maria Schneider, Bobby McFerrin, the Klezmatics, Myra Melford, Pedrito Martinez, Lionel Loueke, Guillermo Klein and Geoffrey Keezer (with whom she has earned a Grammy Nomination for Best Latin Jazz Album of 2009). She is also a full time faculty member of The Clive Davis Institute at NYU-Tisch School of the Arts. Prior to “Keter” she has released four albums, several of which have won Independent Music Awards. Sofia’s work has been featured on CNN, NPR’s Tiny Desk, WNYC’s Soundcheck, The New York Times and many more.  She continues to set herself apart with a bold new vision in the global music scene. She last performed in the area in 2015 in a sold out co-presentation by Next Stage and the Vermont Jazz Center.

Jean-Christophe (JC) Maillard is a French composer, guitarist, pianist, electronic musician and arranger native of Pointe-à-Pître, Guadeloupe in the Caribbean. For the past 20 years, he has been touring, producing, arranging, acting as musical director and recording with all the great names in world music and world jazz. He has collaborated with Grammy wining artists such as Lisa Fischer, Angelique Kidjo, Richard Bona, Toure Kunda, etc. His project “Grand Baton”, an innovative mix of rock and electronic music with Caribbean percussions has released two albums which received praiseful reviews from all over the world, establishing him as a daring creative mind in cross genre music. JC is also known for mastering and being the first player of the SazBass, a new 8-steel string instrument of Turkish origin.

Next Stage Arts Project, winner of grants from the National Endowment for the Arts and ArtPlace America, is a non-profit organization, with the vision to be a beacon of artistic and cultural engagement, contributingto the economic vitality of our region and inspiring creative communities everywhere.Next Stage is fully accessible, with state of the art sound and lighting, comfortable seating, and great sightlines. There is a beer and wine cash bar.

Information about upcoming events and more at: nextstagearts.org