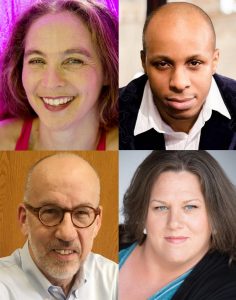 Brattleboro, Vt. – Friends of Music at Guilford (FOMAG) invites singers and music lovers in the Tri-State region to start their holiday season at 1:00 p.m. on Saturday, December 7, with the 49th annual Community Messiah Sing, a benefit for the homeless. Centre Congregational Church, at 193 Main Street in Brattleboro, has been home for the Sing since 1982 and for a few prior seasons as well.

Kenneth Olsson, who conducted the Sing in 2017 and 2018, is moving to the organist’s bench this year. A well-known vocalist and performer on piano and organ, as well as music director for opera and musical theater, he has led FOMAG’s Guilford Festival Orchestra since 2012 and in 2014 co-founded the Southern Vermont Lyric Theatre.

Trumpet soloist Joyana Damon, who has served as instrumental/classroom music teacher at Vernon Elementary School for over twenty years, has also performed with many regional musical groups.

Vocal soloists this year are all Sing veterans donating their time and talent for the cause. Soprano Elizabeth Wohl first sang at this event in 2016 and again three years ago; a vocal soloist and aerialist, she is equally at home in oratorio, opera, musical theater, and circus.

Julie Olsson, a dramatic soprano whose impressive range allows her to perform the mezzo and alto repertoire, is appearing for a second time. She has been a featured FOMAG soloist in two recitals of arias and art song and in several Labor Day Weekend Festival orchestra concerts.

Tenor Walter Cramer performed for the Sing in 1993, 2001-03, and last season. He recently appeared with the BMC Madrigal Singers and is a past member of the Blanche Moyse Chorale. He has remained active in music, theater, musical theater, and opera throughout his career as a higher education administrator.

Now serving as conductor of the Sing, and returning to perform the bass solos for a sixth season, is baritone Cailin Marcel Manson. He has toured as a performer and master teacher throughout the U.S., Europe, and Asia and this fall became director of choral activities and music performance as a professor at Clark University in Worcester, Mass. He also serves as music director of the Bennington County Choral Society and the Keene Chorale.

As many as 250 or more singers from the Tri-State region bring their copy of a Messiah vocal score, otherwise borrow or buy one at the door. A number of other folks come just to listen to Handel’s masterwork and enjoy the rich sound of such an enormous choir. Water is the only beverage allowed in the sanctuary; bottled water is available for purchase at the door.

All door donations at the Sing since 2007, a total of over $22,500, have been passed along to the Groundworks Collaborative to support its programs serving our homeless and disadvantaged neighbors. Sing attendees are encouraged to bring donations of nonperishable food; winter clothing, outerwear, and blankets; and new, unwrapped toys for Groundworks to distribute this Christmas.

FOMAG’s Miriam Adams Howland Memorial Fund is another source of support, continuing Miriam’s tradition of making annual donations since 1997 in memory of her husband, Dr. William S. Howland, who was a great fan of the Sing.

The Friends of Music Holiday Boutique is stocked with several series of Art Cards by local artists whose images have appeared on concert posters and season programs, and a selection of CDs. Sales of these items support Friends of Music concert programs, many of which are offered on a donation basis to make them accessible to music lovers of modest means.

For further information, contact the Friends of Music office at (802) 254-3600 or email office@fomag.org; visit online at www.fomag.org.