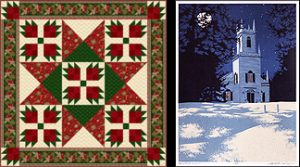 Guilford, Vt. — Friends of Music at Guilford (FOMAG) presents “An Olde New England Christmas” at 7:30 on Friday, December 13, and again at 4:00 on Saturday, December 14. By tradition, this 47th annual Christmas at Christ Church event includes choral and instrumental music for the season, a dramatic reading, and a few carols for everyone.

The a cappella vocal program was drawn from tune books by New England composers born in the middle of the 18th century: William Billings, Supply Belcher, Oliver Holden, Timothy Swan, and Samuel Adams Holyoke, as well as one English composer, Joseph Stephenson. These itinerant singing masters traveled the region from about 1770 through 1810, teaching sight-singing to select groups in church parishes. They gave concerts for local folks and then moved on to the next town. This practice fundamentally changed the place of music in worship, which finds its legacy in church choirs today.

While the tunes are invariably religious, finding Christmas carols among them was a challenge for the Chamber Singers’ director Tom Baehr. Eight examples are included in this concert, contrasted by two modern pieces by New England composers Karl P. Harrington and Charles Ives. The 18th century carols, despite their antiquity, are adventurous for their time and enjoyable for both singer and audience. Although a couple have familiar traditional texts from earlier centuries, their settings in the hands of these composers are very different from “standard” arrangements. While there’s a wide variety of expression in the collection, fans of shape-note singing will find some resonance of that style among them.

Led by Baehr for an eighth season, members of the Chamber Singers for this concert include sopranos Debbie Barry, Christina Gibbons, and Elizabeth Lewis; altos Jenny Holan, Sarah Lott, Laurie Schneski, and Joy Wallens-Penford; tenors Bill Johnson, Peter Tracy, and Bob Wykoff; and basses Orion Barber, Calvin Farwell, and Tom Green. For most of the earlier repertoire, in which the tenors sing the melody line, Debbie Barry sings the tenor part in her soprano register, adding a special quality to those arrangements.

Alternating with the choral offerings are an instrumental prelude, interlude, and postlude of works by some of the same early composers, performed by a quartet of Guilford Chamber Players.

The program’s dramatic reading, performed as usual by FOMAG founder Don McLean, is “Christmas Jenny,” a story by Mary E. Wilkins Freeman (1852-1930), who lived for a time in Brattleboro as a teenager and finished her education at Glenwood Seminary in West Brattleboro. She became a celebrated writer of verse, short stories, and novels, and was the first recipient of the William Dean Howells Medal for Distinction in Fiction from the American Academy of Arts and Letters.

After McLean’s reading, everyone joins in on a few seasonal carols before heading away into the night as the church bell tolls across Algiers Village. Since the noisy heating system has to be shut down during the 60- to 75-minute performance, it’s good to wear extra layers and consider bringing a lap blanket and scarf for extra insulation. The bathroom at Eric Morse’s surveying office next door is available for emergency use.

Door donations at these performances are divided between FOMAG and Christ Church Guilford Society, a nonprofit that oversees the building’s preservation and manages its special-event use. Located a little over a mile south of Exit 1 off I-91, at the corner of Melendy Hill Rd. and Route 5 south, Christ Church was built in 1918; it celebrated its bicentennial birthday in 2018 but has not had a resident congregation since the early 1890s.

Friends of Music offers a holiday boutique of concert CDs as well as several card series with images by local and regional artists whose work has been featured on posters and program books, some ideal for holiday greeting cards or note card gifts. FOMAG’s 54th concert season enjoys media promotion by Vermont Public Radio.

For further information, contact the Friends of Music office at (802) 254-3600 or office@fomag.org; visit online at www.fomag.org.