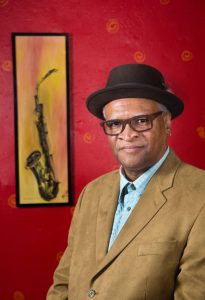 Horizon is a supergroup that performs straight-ahead, acoustic, hardbop music. According to band leader Watson, his composing style and the group’s sound is influenced by Stevie Wonder, Earth Wind and Fire, and Sly and the Family Stone. Horizon does not play covers, they definitely play jazz. But Watson’s concept of jazz is tinged by his love for the grooves he grew up with, the sounds of Motown: there’s a danceable sensibility that imbues Horizon. Take their album, – When Howard Reich of the Chicago Tribune reviewed the band’s album Post Motown Bop in 1991 he said “There`s no mistaking the Motown-based harmonies underlying bebop-like melodic improvisation. But the performances go beyond these sources, for everything is presented in a lean, sleek style uniquely belonging to Watson and his quintet…[they] work together with uncommon sensitivity, creating a joyous, pop-tinged sound.” When interviewed by Tom Ineck of the Berman Music Foundation, Watson said, of the same album, “Motown created the songs that were the hits for our generation. They were the tunes that we grew up with, listened to and danced to. And everybody still has their favorite Motown song. I’d like this record to create that same kind of feeling that Motown did, but in the jazz idiom. Through this record, I want jazz to grab people the way the funk and soul of Motown grabbed us.” Watson deftly accomplished this balance by composing and arranging catchy tunes that embodied the essence, complexity and improvisational vigor of hardbop. His former boss Art Blakey recognized this talent and included many of Watson’s tunes as part of the Messenger’s repertoire. Watson said, “Art Blakey told me just a few weeks before he died that I should record my tunes over and over again so that they could become standards.” Since then, several of Watson’s compositions have become classics, especially the sophisticated burner “In Case You Missed It” that is often performed by advanced high school and college ensembles.

Horizon was big on the jazz scene between 1989 and 1994, when they were supported by Blue Note and Columbia records. Their hard driving approach to smart, melodically based arrangements was strongly appealing, plus the musicians who made up the band were regarded as some of the best players on the scene. From 1994-2004, Horizon took a ten year break, during which time, Watson said, “everybody went away, and matured and did records as leaders in their own right.” Horizon toured and released a reunion album in 2004. Since then, they have played a few popup gigs, but now they are really on the road again. Their 2020 tour, which includes two nights at Dizzy’s in New York City, was highlighted this week in the New York Times where critic Giovanni Russonello wrote: “Since his extended stint in Art Blakey’s Jazz Messengers that began 40 years ago, Watson has been known as one of the more dexterous and affecting alto players in straight ahead jazz. Here he leads an all-star band with the estimable drummer Victor Lewis as a special guest”.

Watson is no stranger to “estimable” drummers – he has recorded with Louis Hayes, Max Roach, Carl Allen, Marvin “Smitty” Smith and Ralph Peterson. Most noteworthy, though, was Watson’s ten year tenure as the Music Director of Art Blakey’s Jazz Messengers with whom he recorded 14 albums and toured the world. Watson loves telling stories about Blakey whose band was a training ground for many of the top musicians who came through the “University of Blakey.” In an interview with the “Jazz Video Guy” in 2014. Watson relays a story about playing a gig at his alma mater, the University of Miami. In a Q & A session, Blakey was asked if he had received any formal education, and his response to the students was: “You guys go to school to get your diploma, but you come with me to get an education – case closed.” Watson spoke about the lessons he had learned from being on the road by saying that “the things they don’t teach you at school are human relations, how to embrace humanity, how to be around people that you don’t really care for, how to be an artist, how to read an audience, which song you’re going to play first, a barnburner or something you can build from.” Watson specifically addressed how Art Blakey intentionally cultivated a deep respect for the jazz lineage in his young charges; he said that Blakey taught them that “the bandstand was our alter, our sanctuary. So no matter how bad our day was, when we went on that band stand, we left our troubles aside.”

After being replaced by a young Branford Marsalis in Blakey’s Messengers, Watson went on to record hundreds of albums with such artists as Grover Washington, Rufus Reid, Maynard Ferguson, Lou Rawls, Freddie Hubbard, Wynton Marsalis, Kurt Elling, George Coleman, Carmen Lundy, Jerry Bergonzi, T.S. Monk, John Hicks, Dee Dee Bridgewater, Dianne Reeves, Cornell Dupree, Joe Williams, David Sanchez and many others. Now a vibrant, young-spirited 66, Bobby Watson is living the life of a respected mentor: In 2000 he was awarded the first endowed teaching chair at the University of Missouri-Kansas City’s Conservatory. He took that appointment to heart: the department is now considered among the country’s top-tier jazz programs. In the fall of 2019, after 20 years of successfully transforming the program, Professor Watson announced that he will be retiring in May of 2020.

Also featured in Horizon, and providing a leading role as composer and visionary, is drum giant and world-class legend Victor Lewis. Lewis is known for his immense recording output and powerful yet melodic leadership from behind the kit. His recording debut was on Woody Shaw’s classic album Moontrane. Lewis remained in Shaw’s group for about 6 years before joining Stan Getz with whom he performed for 11 years.  Lewis has also recorded with and been in the touring bands of Kenny Barron, Randy Weston, Cedar Walton, Charlie Rouse, Abbey Lincoln, Hubert Laws, J. J. Johnson, Bobby Hutcherson, Dexter Gordon to name a few. He has also released numerous projects as a headliner/bandleader.

Using Art Blakey’s model of incorporating the very best young talent to complete the group, Horizon has invited Giveton Gelin to take the place of their usual trumpeter, Terrell Stafford. Gelin, originally from the Bahamas is a student at Julliard (he transferred from Oberlin Conservatory where he was on full scholarship). Giveton has played with Wynton Marsalis for the Julliard Jazz Orchestra and recorded on John Batiste’s (of the Tonight Show) two most recent albums. He attended Betty Carter’s Jazz Ahead Program and is the winner of the 2019 Young Artist Foundation’s Award. The late, great Roy Hargrove said “I really love Giveton’s sound and vocal quality…he is one of the few players that I have heard that actually sings through his horn.”

Horizon’s pianist is Venezuelan-born Edward Simon. Some of the awards Simon has garnered include a Fulbright, a CMA New Arts Work Grant, a Guggenheim fellowship, a MacDowell fellowship and a NAACP Image Award. Writer Ted Panken (in Downbeat magazine) states that Simon’s “command of post-bop vocabulary is encyclopedic and his structures incorporate intricate harmonies, sophisticated contrapuntal voicings, effervescent odd-metered rhythms and the serene melancholic melodies of Venezuelan folk music.”  He has recorded 15 albums under his own name and appears on hundreds of recordings as a sideman. Simon is currently the pianist in the SFJAZZ Collective.

Horizon’s bassist is Carroll V. Dashiell (CVD) who has performed/toured with the Boston Pops, the National Symphony and Washington Philharmonic Orchestras, Dr. Billy Taylor, Geri Allen, the Yellowjackets, Maceo Parker, Buck Hill, Maurice Hines, Stephanie Mills, Vanessa Rubin, Jennifer Holiday and Ray Charles. Dashiell is professor of music at Saint Mary’s College of Maryland, University of the District of Columbia and East Carolina University where he served as the Director of Jazz Studies for 20 years. He is on the North Carolina Arts Council Board, and is Artistic Director of the African American Music Trails Series and the Greenville Grooves Concert Series. He is the Founding Director of the Dr. Billy Taylor Jazz Festival.

Bobby Watson and Victor Lewis have developed a profound way to explore their muses at the highest level through the creation of the group Horizon. Even though the band had its heyday in the early 90s, it continues to provide them with a canvas to develop their projects, incorporating musicians who share their vision and history. In a recent interview on Brattleboro’s WVEW FM, Watson emphasized that each person needs to speak with their own authentic voice. He said “The main thing is to experiment with how you want to present yourself…How can I bring different parts of my life, the gospel, the Rhythm and Blues, the Latin things, the world music, the different parts of my experience into my format, to make it so it can be done in an acoustic setting.” He went on: “When you are the creator, you can’t escape who you are…When you submit yourself to who you are, and you are open to the teachings of others, you find yourself much quicker and your weaknesses become your strengths…For me it’s just about the individual having enough courage to try to blend the tradition with what they hear.” Horizon is just that – a blending of tradition with the sounds percolating in Bobby Watson’s brilliant mind that is then manifest by musicians of the highest level.

Come to the Jazz Center on Saturday, February 15th and enjoy the swinging sounds of one of the top groups of our time. The Jazz Center is grateful to a dear, anonymous, supporter of the VJC Educational Programs, a person who for several years has been involved “on the ground,” doing community outreach and benefiting the Jazz Center and the surrounding community at every opportunity.  The February 15th, 8:00 PM concert will likely sell out, so be sure to purchase tickets in advance. The VJC is thankful for the ongoing support of Holiday Inn Express Suites of Brattleboro.  Publicity is underwritten by the Brattleboro Reformer, WVPR, WVEW, WNPR and WFCR.

Tickets for Bobby Watson and Horizon featuring Victor Lewis at the Vermont Jazz Center are $20+ general admission, $15 for students with I.D. (contact VJC about educational discounts); available online at www.vtjazz.org, by email at ginger@vtjazz.org, and at In the Moment in Brattleboro.  Tickets can also be reserved by calling the Vermont Jazz Center ticket line at 802-254-9088, ext. 1. Handicapped access is available by calling the VJC at 802 254 9088.

Performing with Blakey and the Jazz Messengers in Montreux, 1980

What: Jazz Quintet, a jazz supergroup that performs hardbop