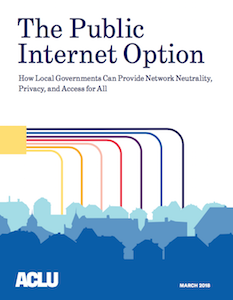 As Brattleboro begins down the path toward adding municipal broadband utility, the ACLU has weighed in with a new report “The Public Internet Option – How Local Governments Can Provide Network Neutrality, Privacy, and Access for All.”

The report compares the necessity of internet access to that of electricity and water, and says that the rollback of net neutrality laws and enforcement threatens equal access (as we have for say, roads and bridges).

The report says there is an option – local broadband service:

Nothing the FCC has done prevents a city, county, or town from directing its own, municipally run service to honor strong network neutrality and privacy policies. If the commercial providers are determined to make money by violating the privacy and speech rights of their users, and if some policymakers in Washington are determined to clear the way for them to do that — then states, cities, towns, and counties should take matters into their own hands by creating publicly owned services that do honor those values and can help ensure an open internet.

Any municipal broadband option should adhere to three guiding principals, they write: High-speed broadband must be accessible and affordable for all, community broadband services must protect free speech,  and community broadband services must protect privacy. They add that “municipal systems should be built to serve all residents equally, even though the demands of affluent neighborhoods might be louder than others.”
The report give background information on the need for such local services, some examples of other places that have succeeded, and tips for creating a successful municipal broadband option.
Worth a read if you are interested in the topic.