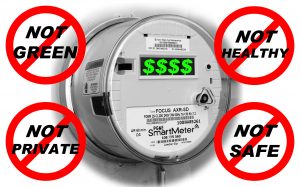 The FCC sets radiation standards, with which all manufacturers of smart meters must comply.

The frequency of cell phone radiation corresponds to a wavelength of approximately one foot. This wavelength is thousands of times larger than structures in the brain responsible for mental processes, and so claims that wireless radiation can cause maladies such as “dizziness” or “memory loss” are absurd.

It is useful to compare the radiation levels of smart meters with those of other wireless devices. Smart meters only transmit data for a few seconds per day. Even if one stands 3 feet from a smart meter when it broadcasts its data, the resulting microwave exposure is 500 times less than standing in front of an active microwave oven, and 1000 times less than holding an active cell phone to one’s ear.

No one spends his life within three feet of a smart meter. Instead, such devices are typically on the outside of a residence, many feet from humans. In addition, microwave intensity decreases as the square of distance from the source, this means that exposure from smart meters is hundreds of times less than cell phones. Indeed, 20-year exposure to radiation from smart meters is no greater than a single 30-minute cell phone call.

A 2011 report by the California Council on Science and Technology concludes, “Exposure levels from smart meters are well below the FCC’s established standards for health effects.”

In short, the health risk to radiation by smart meters is hundreds or even thousands of times less than that of cell phone usage.

BTW, Wi-Fi, Bluetooth and the coming “internet of things” also use the same technology. It’s not far-fetched to turn them off when you’re not using them.

With regards to cell phones, in a 2008 Congressional hearing, the Director of the National Cancer institute’s Epidemiology and Biostatistics Program declared that the effect of cell phone radiation “appears to be insufficient to produce genetic damage typically associated with developing cancer.”

Numerous other studies are summarized at the National Cancer Institute website, which finds “no appreciable link between cell phone use and cancers of the brain, nerves, or other tissues of the head and neck.”

Cell phones have been around for more than 20 years. If there were health issues, it would be common knowledge by now.
The American Cancer Society says that “Because the low levels of energy from RF radiation have not been clearly shown to cause problems even at close range, it isn’t clear that lowering exposure to RF radiation has health benefits.”

I want to tell a story. It’s entirely true. I lived it.

In order to get anything at all, you needed a very expensive antenna with a rotor.

The residents pooled their resources and formed a “cable club” to purchase a super antenna and feed the signal via cables to the members. I became the club president.

It worked. We could get the 3 networks and VT public TV.

After a couple of years, we decided to invest in a “Dish” to add cable TV channels.

We acquired a second-hand dish and installed it in a field in town.

However, we had to save up to buy the necessary electronics, so the dish lay unused for nearly a year.

One of the residents who lived next to the dish started complaining about headaches and sleeplessness which she blamed on the dish.
Since the electronics had never been even purchased, we knew it couldn’t be the dish. It was nothing but a big piece of plastic sitting out in a field. Eventually we were able to convince her that the dish wasn’t the cause of her problems, it was her belief about the dish.

This is called in medicine, a “Nocebo” effect.

I think that nocebos are driving the opposition to smart meters.

Back in 1910, people used to worry about electricity “leaking” from wall outlets and light switches.