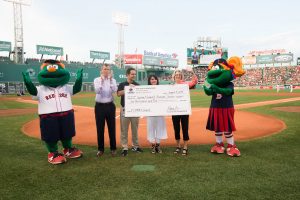 The Red Sox Foundation invites local residents to vote for their favorite non-profit in the the fourth annual “IMPACT” Awards. The awards provide Red Sox fans in the five New England states surrounding Massachusetts with the opportunity to vote to decide which organizations will be awarded grants. Starting this year, the IMPACT Awards will highlight a different charitable mission each year, with 2018 focusing on non-profits dedicated to improving social justice, diversity, and inclusion in New England communities.

The Foundation will donate a total of $75,000 in total to fifteen non-profits, with votes determining a first, second, and third place winner in each of the five states. First place winners will receive a $10,000 award and check presentation during a pregame ceremony at Fenway Park, tickets to a game, recognition on the team and foundation websites, and air time to promote their charity during a game in the NESN broadcast booth.

Charities with the second and third most votes will receive grants of $3,000 and $2,000 respectively, along with additional benefits. To be eligible to receive an IMPACT award, an organization must be a recognized 501(c)(3) non-profit public charity in good standing, located in New England and servicing New England residents, with a mission that focuses on improving diversity, inclusivity, and social justice in our New England communities.

IMPACT Award voting for all five states starts today on redsox.com/impact. The voting deadline for Vermont and Rhodes Island is June 27. The deadline for New Hampshire, Maine, and Connecticut is July 13.

About the Red Sox Foundation

The official team charity of the Boston Red Sox, the Red Sox Foundation has donated to over 1,680 organizations since its creation in 2002, and focused on making a difference in the lives of children, families, Veterans, and communities in need by improving their  health, education, and recreational opportunities. Through partnerships with best-in-class organizations in healthcare, the Red Sox have helped raised over $135 million for cancer treatment and research for The Jimmy Fund, supported more than 15,000 Veterans and their families suffering from the “invisible wounds of war” with the Home Base Program, and helped the Dimock Center serve over 17,000 patients annually with health and human services. The Foundation’s self-run education and youth baseball programs have helped 274 Boston Public Schools students with college scholarships, and promotes healthy choices and valuable life skills to more than 700 urban youth annually through its RBI baseball and softball program.

A 501(c)(3) nonprofit, the Red Sox Foundation raises funds through special events, corporate sponsorships, and grants. Founded and initially funded by Red Sox Principal Owner John Henry, Chairman Tom Werner, President/CEO Emeritus Larry Lucchino and their partners, the Red Sox Foundation has won numerous awards for the impact of its innovative programs. In 2010, the Foundation’s Red Sox Scholars program was recognized by Major League Baseball with the first-ever “MLB Commissioner’s Award for Philanthropic Excellence.” In 2009, the Red Sox Foundation was honored by the Robert Wood Johnson Foundation and the Sports Philanthropy Project with the Patterson Award as the nation’s “Best Team Charity in Sports.”  For more information about the foundation, visit redsoxfoundation.org.