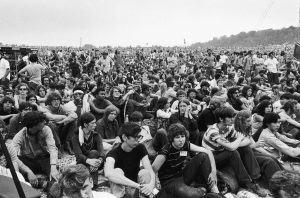 I was part of the Vermont Peace Movement from 1882 to 1984. A very short time indeed. However it was packed full of intense moments of friendships and activism with David Dellinger (who then lived in Peacham, Vermont) and Abbie Hoffman both of the Chicago 7. We were arrested numerous times during those Nuclear Freeze days of Helen Caldicott. When David Dellinger endorsed Jesse Jackson for President in the 1984 Vermont primary I deeply pondered what it would take to bring about a world where “Imagine All the People Living Life as One”. How do you vote in a change of heart?? So here is another page of my life to consider as once again our country is in the midst of anguish and pain. Thank you, Melevav of the old Common Loaf Bakery, Brattleboro.

Radical of Radicals – Depth of A Movement

The counterculture landscape of the ‘60s teemed with radicals, extremists, idealists, and revolutionaries lurking around every corner. Mainstream society hated these troublemakers, these communists, but we loved their passion for peace and justice. Abbie Hoffman and Jerry Rubin jumping up and down on the table in the Chicago courtroom in 1968 didn’t rankle us; they had bucked the system and won a great victory. Hope welled up within us that maybe we could change the Establishment. We demonstrated in the streets for an end to the war in Vietnam, a nuclear freeze, the dismantling of nuclear reactors, and justice in South Africa. Inspired by the teachings of Gandhi, Martin Luther King, Jr., Scott Nearing, the Chicago Seven, and the Berrigans, we put all our heart into demonstrating for peace, organizing rallies, getting arrested, and writing letters to the editors and our Congressmen. Still, the unjust system churned on. Looking back now, it’s hard to see any lasting results from all our radical hoopla.

But were we truly radicals? The word radical, like its etymological counterpart, radicle, comes from the Latin word, radix, which means root. A radicle is the first young root put forth from a seed, the first carrier of life-giving nutrients to the young plant. Without this radicle, the seed doesn’t have a chance, lacking its most basic root. So, too, any so-called radical or extremist can only bring about a lasting positive change in society if he himself is rooted in a life-sustaining source.

So were we truly radicals? Did our roots go down into a life-giving source that could sustain us and bring about the goals of the Movement? No! Time and time again we went home dismayed and frustrated a” our efforts to organize peace coalitions had come to nothing and the peace groups we belonged to had divided into warring factions. Eventually we left the Movement and fell back into the same system from which we had tried to escape. Instead of changing the world, the world had changed us. At one time our hero, Jerry Rubin, had railed against the Establishment and demanded its violent overthrow. Now he is a New York socialite, hob-nobbing with politicians and Wall Street businessmen. The swords have yet to be beaten into plowshares or the bombers to turn into butterflies over our nation as Joni predicted.

The radicals of the ’60s had roots that went only as deep as the society which they attempted to change. According to David Dellinger, one of the Chicago Seven, “[The Peace Movement is] a movement whose members are still being crippled by the society from which we are trying to free ourselves and others. Contrary to some interpretations, the Movement’s erraticism and inconsistency tell us more about the sickness of the society against which we are in revolt…” He believed that it was worthwhile to continue to be involved in the Movement in spite of its weakness. At least in that way one’s suffocating human passions would be able to flower from time to time. But wouldn’t it be better if our lives could flower continually, actually bringing about justice and lasting peace?

For a radical movement to blossom and bear abundant fruit, it has to be rooted in good soil, not in the barren soil of selfishness, compromise, and division. There was once such a movement, an uncompromising people who were in total unity. They spoke to their generation with one voice, a voice so clear and exposing that the established institutions were shaken to their foundations. They came together some two thousand years ago while the iron might of Rome ruled all of the known world. Despite its brutal strength, the Roman state came to be greatly threatened by this gentle people and their stirring message.

These radicals were called together from every segment of society. One of them was a revolutionary guerrilla who advocated the violent overthrow of the hated Roman oppressors. Another was a tax collector who collaborated with the occupying army and even lined his own pockets by overtaxing his fellow countrymen. These two, a guerrilla and a tax collector, would have hated each other unless a greater power had bound them together. Still others in the group were simple fishermen. What held them together was their devotion to one man, the Radical of all radicals. His spirit and his teaching were like nothing they had ever heard before. He so captured the imaginations of his followers that they all left everything behind to follow him.

After his death and resurrection, he gave them his Spirit to empower them to live a radical life together that would astound the whole world. Within days, over three thousand men and women had committed themselves lock, stock, and barrel to their Master and to the teachings of those who had been taught by him. Banding together out of love for one another, they threw all they had into a common pot, giving no thought to their own needs. Their passionate message to come out of the perverse society — backed up by their daily lives of loving and caring for one another a — spoke louder and clearer than all the hollow rhetoric of the false prophets of their time. Heart by yielding heart, a new nation was born, as these radicals abandoned their jobs and old lives to be healed of the crippling effects of the society they left.

Sadly, this new nation did not endure long enough to bring about their Master’s return and the establishment of his good government on the earth. Like a tree that stops bearing good fruit and is cut down, the life of that nation ceased. However, the root remained, and now, at the scent of water, it is starting to sprout once again. Its radical life has returned. There is once again a people who are putting the crippling effects of society’s sickness under their feet. In our communities, men, women, and children are being given one heart and one way. At last we are home. The Radical of all radicals, whose name is Yahshua, the Son of God, has brought us home. We responded to his call to give up our lives and all our possessions, and having died to our old lives, we received his life. Because we no longer live for ourselves, we are able to live together in peace and justice. We invite you to come and see this radical life!