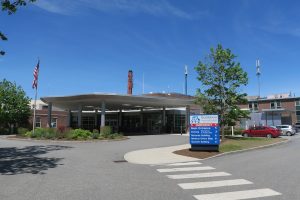 According to Gina Pattison, a BMH public affairs representative, the ICU at Brattleboro Memorial closed officially in June 2018 when the unit was physically removed. In its place is what is called a PCU or Progressive Care Unit, which provides a notch lower level of care than an ICU but makes more efficient use of nursing staff. The hospital reps we spoke to made clear, however, that this change has not affected patient care.

Chief of Nursing Jody Stack said the ICU was phased out in 2016, at which time patients in need of this level of care were transported to other regional hospitals, chiefly Dartmouth-Hitchcock, Cheshire Medical, and Bay State Medical in Springfield, Massachusetts.

With regard to the difference between an ICU and a PCU, Pattison explained that an ICU is required to have dedicated nursing staff who only care for ICU patients, whereas with a PCU, any hospital nursing staff can care for a patient in that unit. In addition, ICU nurses are required to have special training to provide care to critically ill patients. PCU staff do not require this training to work with the patients in the PCU.

In order to provide the appropriate level of care to a patient in critical condition prior to their being moved to one of the ICU hospitals or in the event that a patient becomes critical while at BMH, the hospital makes use of “floaters” staff nurses who have ICU training. Jody Stack said that these floaters are not agency nurses, but are on permanent staff at BMH. They “float” between the Progressive Care Unit and the Emergency Department wherever their skills are needed. This way, says Stack, the hospital can assure that there will be someone in the hospital with ICU skills “24-7.”

Stack said that demand for the ICU was “very low,” too low to justify the expense of keeping it open and staffed. In addition, she said that efficient use of nurses’ time was also a factor, and that an ICU nurse’s skills can become rusty if not in constant use. The floater system, she said, allows them to “keep their skills up.”

When asked how much cost was a factor, Stack said that there was a savings associated with closing the ICU given the level of training required of ICU nurses, the cost of retaining them, and the additional cost of using “contract nurses” when staff nurses weren’t unavailable.

Hospital cost-cutting has been ongoing in southern Vermont. Springfield Hospital recently announced the closure of its birthing unit, sending patients in need of those services to BMH, among other hospitals. For the time being at least, BMH plans to keep its birthing unit open.

BMH has had its troubles with cost as well, and after a profitable 2015, lost around $2 million a year in the last two fiscals. As Dartmouth-Hitchcock and Cheshire Medical pick up more services from BMH, the possibility of a merger, first reported in 2018, becomes more plausible. Stack was not asked to comment on these issues, but says that regardless of where patients are treated, they will be well cared for.