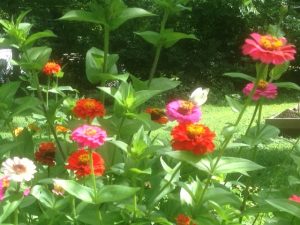 One of the consolations of the late summer season is the abundance of butterflies who flock to the open fields and gardens to enjoy the sunshine, sip the dew, and drink the nectar from the last of the summer flowers. We’ve had butterflies all summer long, but not in the numbers or variety that we have now. Earlier, Tiger Swallowtails prevailed, fluttering on their exotic yellow wings to the daisies and phlox where they made a long zig-zagging circuit of every promising flower. We saw at least one Zebra Swallowtail, bigger than its cousin the Tiger, out browsing red clover in the field next door. Silver Spotted Skippers were ubiquitous in midsummer. And later, I was happy to see a few Monarchs, with whom I have a long friendship going back to when I raised one from an egg as a child.

Now, the cabbage butterflies and even some pale yellow sulphurs have come in force, along with representatives of less common species such as checkerspots, frittilaries, and other less obvious. (It’s hard to identify butterflies on the wing, although binoculars help in this regard.)

As pretty and seemingly delicate as they are, the butterfly tribe are a competitive lot. Although there are more than enough flowers to go around, there is something about the zinnias that causes a certain possessiveness to erupt. For a while, it looked as though two white cabbage butterflies had claimed ownership. For the most part, they shared nicely, but every now and then, one would fly at the other, and off they would go in a tumbling dance across the yard. Perhaps they were just glad to see each other, but it seemed more like a territorial squabble to me. I’ve also noticed that if a larger species shows up, such as the checkerspot today, the smaller cabbage butterflies automatically retreat.

Their affinity for flowers tends to make me think of them in one breath, as though butterflies were some sort of flowers with wings. In fact they are foragers and, in the process, pollinators as well. But there is more to the butterfly than its mere niche in the biosphere. Their bright colors and elaborate patterns allow them to function, for humans at least, as ambassadors of beauty from the natural world. Certainly few of us are immune to their charm.

I don’t know what destiny awaits our colorful friends, whether some are en route to points south, or if, for others, this golden summer will be their last season. Best to shrug off such questions and remember that they will all be back next year, in some form at least. Meanwhile, they are lovely to see on sunny days, flitting bright and carefree among the flowers of September.