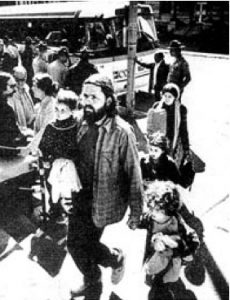 There are moments in your life and in history that one never can forget. They change the course of your life, of the planet’s history. We are living in such days right now in June of 2020. For me ,as I was watching my carrots grow in Walden, Vermont, a wake up call came to my life on June 22nd 1984. The State of Vermont conducted an early morning raid on a peaceful community of Bible believers. The search and detention order had no names of the children to be seized, no names of accusers and the clear charges that they were making on that day against those parents. When Judge Frank Mahady saw all those parents and children in Orleans County Court, Newport, Vermont that day he is quoted as saying,”In all my years as a family and child judge I have not seen such a close bond between parents and children as I do today! There is something deeply wrong with how these people and the way they choose to live their faith is being viewed by the State of Vermont”.

Those families and their children were released on the early evening of that same day. The following is a letter that I wrote and sent to the Vermont Press back in 2005. In 2005 we showed a the “Island Pond Raid” documentary. Of all the Vermont towns that we presented this evidence no turn out was greater then Brattleboro’s! The accompanying Wikipedia picture that I have included here shows the picture of one of the Island Pond community members that spoke to the people of Brattleboro that night. In tears that man shared how he was a faulty (not perfect human being) and how he deeply loved his children wanting them to be raised to be able to make wise choices in the future. Our heart has always been to prepare our children to be loving, kind and understanding of others. Now in 2020 those qualities are desperately needed.

Dear Vermont Editors….
‘This documentary shows first hand what actually took place prior to, during and after the eventful day of June 22nd 1984 in Newport, Vermont. The two years before the raid saw media reports that a “strange group” had moved into the NEK region of my home state. Not once was it mentioned that many native Vermonters had invited these “Southern Believers” to move up North and live with them. To teach them how to love and sustain community. In fact one of these Vermonters was my former baby sitter!

These Vermonters were desiring to pursue peace and raise their children as much as the early Pilgrims sought religious freedom back in 1620!”