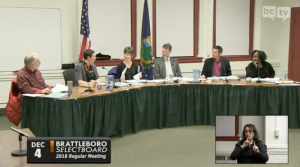 Read on for coverage of the Brattleboro Selectboard’s regular December 4th meeting. The mini-trial in the middle of the meeting regarding Dozer the Dangerous Dog took a turn when the owner made claims that it was not Dozer, but Buddy, her other dog. This led to much confusion in the courtroom.

In more substantial and long term news, the Department of Public Works got the go-ahead to do a feasibility study to see what new facilities would entail. Nothing will be built anytime soon.