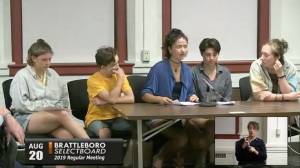 The Brattleboro Selectboard listened to a large crowd of concerned citizens before deciding by a split vote to create a new Sustainability Coordinator position for the Town. The length of this agenda item pushed back most other agenda items, which led to rushed discussions and decision making later in the evening.

They did finish everything on the agenda by 10:20.