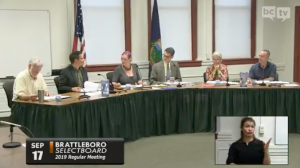 The Brattleboro Selectboard decided once again that there is no climate emergency worth declaring. The proposed declaration was “a mess” and existing efforts were deemed ample.

The board had their expectations managed about possibilities of self governing anytime soon, budget season is lurking, and the possibility of a bike lane on Western Ave will be further investigated.

Apologies in advance for spilling mistakes.