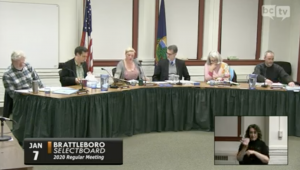 The FY21 proposed budget inched closer to becoming the FY21 official budget at the first meeting of the Brattleboro Selectboard for 2020. The board ran through a list of final loose ends, heard from the human resources committee and police department, talked loans and grants, discussed public toilets, and were offered both CBD joints and liquor.

A citizen stood up for war crime whistleblowers, selectboard goals were reviewed, and more. A few budget meetings remain in January, but the board skipped the review of their upcoming meetings schedule so any meetings are theoretical at this juncture.