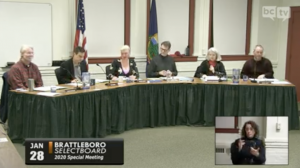 During public participation, citizens questioned the police chief about the recent uptick in vehicle break-ins.