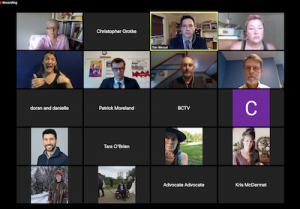 The Brattleboro Selectboard held another special meeting via Zoom to discuss an RFP for review of police and community safety. It was long meeting that resulted in sending the draft RFP to town staff for further changes and possible approval at the August 18 meeting.

Community members were surprised that the board decided to revisit already agreed-upon issues, and there was a long discussion about the loss of the chat feature in meetings.