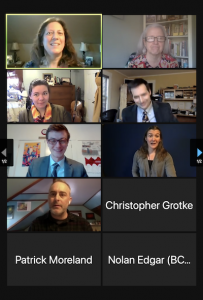 Ian Goodnow, Daniel Quipp, and new member Jessica Gelter took their oath of office and joined Tim Wessel and Elizabeth McLoughlin to form the next selectboard.  New signed Oaths of Office will be arranged at a later date.

They all affirmed that they will faithfully execute the duties of selectboard member for the Town of Brattleboro, doing equal rights and justice to all people, in the best of their judgement and ability, according to law under the pain and penalties of perjury.

Tim Wessel offered a comment prior to the election of officers.  He said he stepped into the position of Chair as things were just locking down last year, that it has been both hard and rewarding. It’s been hard on our family, he said, with loss of income and steady childcare. Because the position of Chair demands extra time, he’d said he’d like to step back and give more time to the family.

The board then formed and elected officers.

Elizabeth McLoughlin was elected Chair, and wished good luck. She then took over they finished the voting.

McLoughlin welcomed Jessica and recognized Brandie Starr and Time Wessel as former Chairs of the board, and for their grace and humility for stepping down as chairs. “It’s a testament to our humility.”  She predicted a great year ahead for Brattleboro.